Amy Lee and Co. rip through new single 'What You Want' 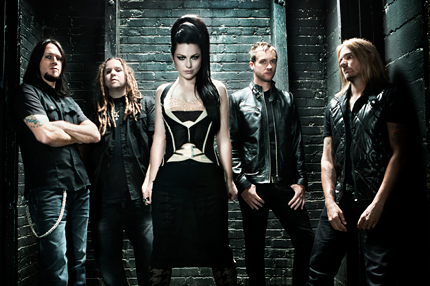 Evanescence’s self-titled new album hit shelves on Tuesday, and you can listen to the whole thing right here, via our exclusive stream. Amy Lee and Co. stopped by Jimmy Kimmel Live! on Thursday night to give fans a taste of what the new tracks sound like at full-force, live intensity. “We’re more truly a band now than ever before,” Lee told us recently.

Kimmel probably hasn’t seen so much black clothing and leather since Rammstein stopped by last spring. First the band thundered its way through the alt-metal stomp of “What You Want,” the lead single from the new album. Going into the closing credits, they added massively hooky hit “Going Under,” from multiplatinum 2003 debut Fallen.

Lee may groove on M.I.A. these days, but the fist-pumping frontwoman still has pipes well-built for reaching metal-show rafters, and the crowd responded. “I won’t be broken again,” Lee howled particularly emphatically last night. She wasn’t kidding.