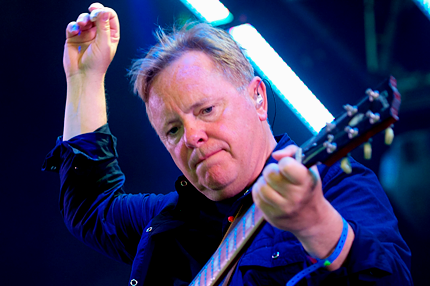 The long-running feud between the members of two pioneering British bands — post-punk icons Joy Divisions and synth-pop offshoot New Order — began a new chapter Monday night as the latter played their first show in five years. The Brussels, Belgium, gig was the first of two scheduled European charity shows and notably went off without original bassist Peter Hook. Back in the lineup, however, for the first time since her 2001 departure, was keyboardist Gillian Gilbert, who first joined the band more than three decades ago.

The shows escalate an increasingly nonsensical back and forth between Hook and the rest of New Order. Most recently, Hook has been playing Joy Division tribute shows without his surviving former bandmates — despite criticizing those former bandmates for playing New Order songs without him. In 2007, following some of Hook’s original comments about the band splitting, singer Bernard Sumner and drummer Stephen Morris issued a statement saying that Hook “does not speak for all the band.” (New Order famously formed after Joy Division frontman Ian Curtis committed suicide in 1980.)