At an Atlanta gig, the ex-Pavement frontman reminds us that indie heroes have heroes of their own. 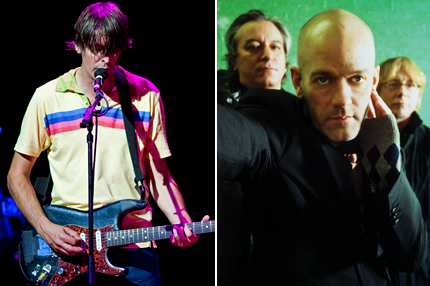 Radiohead and Coldplay have paid tribute to the now-defunct R.E.M. at recent shows, and the retirement of the Athens, Georgia, icons has deeply affected Stephen Malkmus, as well. Indie-rock heroes have indie-rock heroes of their own, and R.E.M. were an acknowledged crucial influence on Pavement, who paid overt tribute in the song “Unseen Power of the Picket Fence” — “The singer, he had long hair / And the drummer, he knew restraint / And the bass man, he had all the right moves / And that guitar player was no saint,” Malkmus once sang wryly, before noting that “Time after Time” was his least favorite song. At a recent Atlanta gig in support of his latest album with the Jicks, Mirror Traffic, Malkmus and Co. nodded to their progenitors by covering 1981 debut single “Radio Free Europe.” R.E.M.’s home-state crowd went berserk. As SPIN’s Rob Harvilla observed, with Malkmus-esque wryness, after the band called it quits last month: “A worthy band to worship, to shamelessly emulate, to be inevitably disappointed by.”