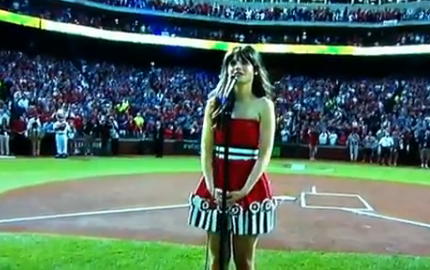 Zooey Deschanel has taken her latest step from indie sweetheart toward America’s sweetheart. As her FOX sitcom The New Girl awaits the end of baseball so it can return to Tuesday nights, the singer and actress seized the opportunity to perform “The National Anthem” before Game Four of the World Series on Sunday night. While “The Star Spangled Banner” leaves plenty of room for error — just ask Christina Aguilera — Deschanel offered up a pretty much faultless rendition, avoiding any frills or funny stuff and instead making this melodically difficult song sound sweetly conversational and, well, all-American. Good timing, too: Deschanel’s group She & Him with singer-songwriter M. Ward will release their holiday album on Tuesday, and The New Girl returns to prime time on November 1. The game took place at the Texas Rangers’ Ballpark in Arlington, so former president George W. Bush was on hand to throw out the first pitch, but pay more attention to St. Louis Cardinals manager Tony La Russa. He looks touched.