Rick Ross Must Be OK… Because He’s Selling Chicken Wings 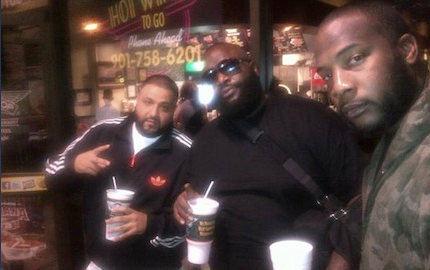 Rick Ross gave the hip-hop world quite a scare on Friday, when he suffered two reported in-flight seizures. But don’t worry, since late Sunday night, Ross cohort DJ Khaled posted a photo of himself, Ross, and manager Gucci Pucci standing outside the Memphis, Tennessee, Wing Stop restaurant where Ross is literally the boss. Wrote Khaled, “My brother ROZAY!!IS GOOD!!!” According to The Hollywood Reporter, Ross was supposed to appear at Wing Stop on Saturday to publicize its opening, with a later date scheduled that night in Greensboro, North Carolina. Ross’ next live appearance is set for October 21 in Atlanta, with fifth album God Forgives, I Don’t due to arrive on December 13; check out his collaboration with Nick Minaj here.