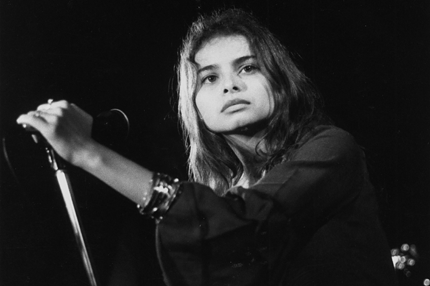 Though Mazzy Star haven’t released new music since 1996, the indie-rock world has never lacked for bands that follow their dusty, languorous approach to dark-hued psychedelia. In recent years, that influence has been cropping up more and more often, whether just in terms of general mood (the narcotic slow jams of Baltimore duo Beach House) or more specifically (Southern California band Dum Dum Girls’ new “Coming Down” bears no small resemblance to Mazzy Star’s unlikely mid-’90s alt-rock radio hit, “Fade Into You”). Just in time, then, the core duo of singer Hope Sandoval and guitarist David Roback have returned, and they’re releasing two singles by the end of the month.

Hear short previews of the songs over Amazon. The first, “Common Burn” (due out October 24), finds Sandoval cooing about “simple things, like your overcoat” over and delicate acoustic-guitar strums and smoldering electric-guitar leads. Meanwhile, “Lay Myself Down” (due out October 31), sets its jaunty acoustic strums amid splashing tambourine, loping bass, and sinuous steel guitar. “She says one thing, that’s just enough,” Sandoval intones blankly. Hard to tell much from clips, but it’s enough to pique curiosity about the complete songs — no Lou Reed and Metallica train wreck here.

Roback and Sandoval haven’t been silent all these years. Roback, whose brand of hazily rambling dream-pop goes back to his 1980s recordings as part of California’s Paisley Underground movement, turned up for a slide guitar part on the final studio album by late U.K. folk pioneer Bert Jansch, 2006’s The Black Swan. In 2009, Sandoval released her first album in eight years with the Warm Inventions, a band she started in 2001 with My Bloody Valentine drummer Colm Ó Cíosóig. And Mazzy Star’s “Into Dust” has recently been soundtracking a Gears of War commercial.

Check out SPIN’s original 1993 review of the band’s breakout album, So Tonight That I Might See, here. And remember, there are still plenty of 1990s bands who can reunite before the retro cycle reaches the 2000s.