In an interview a year before his untimely death, the ex-Weezer bassist explains why he had to flee the music biz 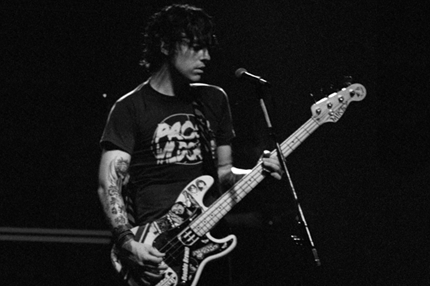 For his story “Second Acts,” in the March 2010 issue of SPIN, contributing writer David Peisner spoke with 44 musicians who chose to leave pop music behind for other pursuits. His subjects included the late Mikey Welsh, who played bass with Weezer from 1998 to 2001. Welsh later resurfaced in Burlington, Vermont, as a painter, and spoke frankly with Peisner about how his time spent in the band was a dream come true that soon turned overwhelming and unmanageable. Here is an extended version of the interview that ran in the magazine.

SPIN: Do you have a personal highlight from your Weezer days?
Mikey Welsh: I guess, probably, the week that the “Green Album” came out. That was a good week. It debuted really high and we played Saturday Night Live and got flown in a private jet from L.A. to New York to do the show. And Christopher Walken was hosting, so we got to hang out with him a little bit. That was really fun.

Why’d you decide after leaving Weezer to refocus your attention on visual art and essentially put a musical career behind you?
I think that, in Weezer, I had this whole list of fantasies and goals and dreams that I’d had since I was a little kid and wanted to be a rock star. And as I lived out each little dream, it was sort of like checking one thing off the list at a time. And I’d think, “Well, I got that out of the way.” And I think I was living so fast during that time, burning the candle at both ends-that combined with the reality of what it was actually like playing at that level of success and getting sick of a lot of things really quickly. Ultimately, I ended up having a nervous breakdown and had time to reflect on whether I wanted to continue playing music and living that kind of life. And I found out that I really didn’t want to keep doing that. I didn’t feel like I was being true to myself. I wanted to be a real artist and go live someplace quiet and grow a beard and make real art and not deal with all the extraneous bullshit, which there is a lot of. At that level, there is a lot of unpleasantness.

Was it a difficult decision?
The only difficult thing was, I guess, adjusting from living that kind of lifestyle and being on tour all the time and getting special treatment to sort of living a calmer life. I had been playing music my whole life so that was certainly a big adjustment. All of a sudden, not playing music every day, was a big thing. But the art really filled it in nicely. And the more and more I fell in love with painting, the easier it was to forget about all that stuff.

I assumed you’ve always had an interest in painting. Was that something you’d been doing all along anyway?
My mom’s a painter and ever since I was a little kid I was surrounded by art. And I had always done it as a kid, but I didn’t dive into painting full-time until after I had left the band and got really serious and dedicated about it. But it ended up being something-I don’t miss playing music at all. My wife actually plays the bass too, she used to play in a band, so between us we have a lot of basses in the house, but I never pick one up and play it. I listen to music when I work every day and it’s still a big part of my life but I don’t miss playing it at all. It’s strange I guess, saying that, but I really don’t.

Are any of your kids interested in art or music [Welsh is survived by a son, a daughter, and a stepson]?
Honestly, I think with my children, just because of my success with music and my success as a painter, I don’t necessarily want to push them into doing those things. I want them to just naturally find what they love doing and pursue whatever makes them happy. Honestly, for instance, my three-year old son Jack, I bring him down to the studio in my house and actually paint with him, usually a couple times a week. He doesn’t need much guidance because he seems to have a really natural ability at it, even though he’s three. So I do paint with my youngest boy. But I don’t necessarily want them to go into those areas.

On a day-to-day basis, what does your work entail these days?
I pretty much paint every day. Anywhere between six and 10 hours a day. And I get insomnia a lot-I shouldn’t say a lot, but quite a bit-so when I do, I will work from 11 at night until six in the morning. I’ll work then too. I don’t watch TV or read or anything. I paint when I get insomnia. But an average day is between 6 and 10 hours a day. I work on several paintings at a time.

Is the creative impulse to paint or make sculptures similar to the impulse that inspired you musically?
It’s a lot different with painting because of the solitary nature of being a painter. With music, obviously, you have to rely on these other guys to show up and play and rehearse and work on songs. I think being a painter and being alone in the studio every day you have to rely on different motivators. In the last seven or eight years that I’ve been painting full-time, the urge to paint feels much more like I really have to be doing it than music ever did. It’s really important that I do it every day for my own sense of well-being.

Is the satisfaction you get from painting comparable at all to the satisfaction of playing music?
I think there’s a much deeper sense of satisfaction, deep in my soul, when I finish a painting or several paintings that I end up really loving. As opposed to playing in front of a huge crowd of people with the band and it seems like, it’s more of an ego-stroking thing, playing a great show in front of 50,000 people than being alone in the studio and finishing a painting that I’m really happy with. The painting is so personal and private and feels so much more connected to me.

Is it tough for you to make a living as an artist?
I can’t say I’ve had a tough time doing well with my art. I think that I’m in a different position than a lot of artists-having played in a hugely successful band and selling a lot of records and having that security financially. I’ve always done really well with my art since I started doing it-having shows and selling paintings for the last seven years. I’m sure the Weezer name has something to do with that. I just had an opening in Boston and it was packed, wall-to-wall people. And it was great. And the response to all the new work was fantastic and I got a lot of early inquiries from people who wanted to buy work. I also do a lot of commissions for people. I did a line of snowboards for Burton a couple years ago. I got commissioned to do a mural down in Boston. I’ve been really lucky.

Are there any things you miss about playing in Weezer or music in general?
No. [Laughs] I wish I had a better answer for you.

Actually, it’s a great answer. Concise and to the point.
There really isn’t anything I miss because I feel like I did it all. I did everything that I ever dreamed of doing, playing music and getting to a really high level of success and touring all over the world and playing in front of huge crowds and being on TV.

Are you still in touch with any of the Weezer guys these days?
Uh, no.

Have you paid attention to what they’ve done since you left?
Nope. I think there may have been a couple times when I was in a store or something and heard music that I ended up finding out was Weezer, so those are the only times I feel like I’ve heard any new music of theirs since I left. Which was a pretty long time ago now. But I don’t follow what they do at all. I just hear through friends. Someone told me that they were touring over the summer, but I’m very out of the loop. I don’t really listen to any contemporary music.

What do you listen to while you paint?
This is going to sound a little demented, but I only listen to one album when I paint, on my iPod, and I listen to it over and over and over again and that’s the “White Album.”

Really? Demented, perhaps, but very interesting.
My wife downloaded all this music onto my iPod and I was listening to the Beatles and Sabbath, and the Cows and the Jesus Lizard, which are some of my old favorites. And then I sort of just started whittling it down further and further until now for the last three or four months, that’s all I listen to every day, the White Album. When the album goes through it’s cycle, I just rewind it to the beginning and play it again.

Can you put your finger on what inspires you about it?
I think that album is just so all over the place. It’s such a schizophrenic record. It’s just got so many different personalities. And the songs are all so different and there’s so many different moods on it that are up and down and up and down. And I think that’s what I love about it. It never gets old to me. I just can’t stop listening to it.