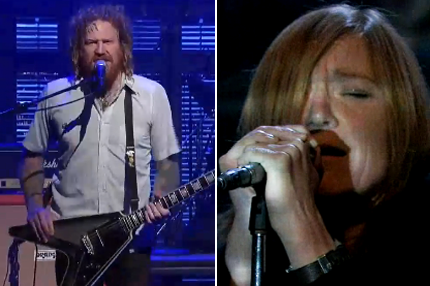 Atlanta-based Mastodon, making a return performance to the Letterman set, tore through sludgy single “Curl of the Burl,” from their concept-free fifth album, The Hunter. Guitarist-singer Brent Hinds can be seen unleashing some particularly ferocious riffs on his unmistakable Gibson Flying V guitar. Referring to another guest on the night’s show, actor George Clooney, Letterman riffed, “Let’s all go to Clooney’s hotel and tease him a little bit.”

Bristol, England’s Portishead, appearing on Fallon after organizing and performing at last weekend’s All Tomorrow’s Parties festival, brought trippy synth drones and singer Beth Gibbon’s wood-smoked purr as they performed “Chase the Tear,” released digitally in late 2009 to benefit Amnesty International. The song will be available on vinyl for the first time on October 5 via XL Recordings, the label has announced, as a 12″ single backed with a version of the track by Toronto electronic act Doldrums. As an online exclusive, Portishead also played the hauntingly gorgeous “Mysterons,” from 1994 debut album Dummy.

Black Star had plenty to talk about on the Colbert Report. The two MCs performed a previously unreleased song, “Fix Up,” which surfaced online earlier this year. They also treated audiences to the debut’s “”Astronomy (8th Light)” and sat down for an interview with host Stephen Colbert. “We do a Black Star reunion show about 10 times a year,” Kweli told SPIN, with a laugh, in a January interview.

Watch: Mastodon, “Curl of the Burl”