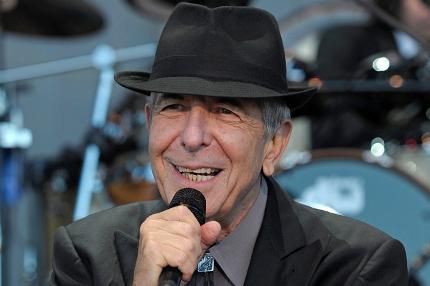 On October 15, Leonard Cohen released a sprawling 18-disc box set compiling all of the legendary songwriter’s 17 studio and live albums, up through 2009’s tour document Songs From the Road. By the time newcomers are through listening to all of that, there could be a brand-new Cohen studio album. The singer and songwriter behind “Hallelujah,” “Suzanne,” “Chelsea Hotel No. 2″ and other classics has revealed he will release his first album since 2004 sometime next year, Reuters reports.

Titled Old Ideas, the album is already in the can and contains ten previously unreleased songs, Cohen said. “I’ve played it for people, and they seemed to like it,” the 77-year-old told journalists in the Spanish town of Oviedo, where he was receiving an award for his poetry. Cohen added that he hoped to go on tour again, but cautioned, “I never quite know whether there’s going to be a tour or not.”

According to LeonardCohenForum.com, the only song from Cohen’s recent tour that will appear on the album is “Darkness.” Below, hear a 2009 Las Vegas performance of the bluesy, organ-streaked song, which could almost pass for a Tom Waits cut. “I don’t smoke no cigarettes,” Cohen sings, smokily.