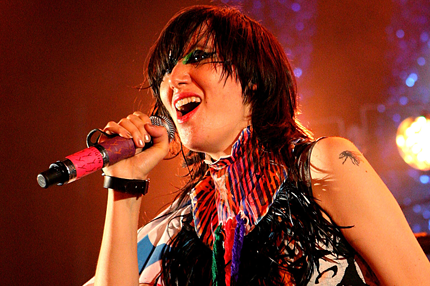 In an almost comedic study in extremes, Yeah Yeah Yeahs frontwoman Karen O has a) debuted an opera and b) recorded a song for Chipotle. Let us begin with the more delicious of the two stories…

Chipotle has teamed up with musicians before, most recently for an animated video that features Nelson himself covering Coldplay’s remarkably enduring post-breakup weeper “The Scientist.” The Yeah Yeah Yeahs frontwoman’s contribution is meant to call attention to the vanishing family farm, and also to promote the company’s Boorito campaign: Wear a costume on Halloween night, and get $2 burritos, with proceeds benefiting the Cultivate Foundation and Farm Aid. Sure beats selling shoes.

Then there’s Stop the Virgens, O’s self-described “psycho-opera,” which opened last night at Brooklyn’s St. Ann’s Warehouse. The singer joined forces with director Adam Rapp and produced the opera as part of Vice and Intel’s multimedia Creators Project. “It’s gonna blow people’s minds,” Yeah Yeahs Yeahs guitarist Nick Zinner says in a new trailer for the work, which runs through October 22. SPIN will have a full report on the show next week.