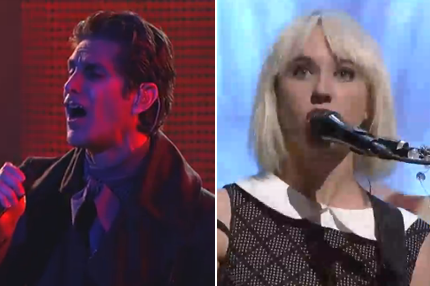 One band that laid the groundwork for alternative rock and a younger batch of speaker-destroyers steadily making their way to the top: Late-night TV watchers had their choice of both on Thursday night. Jane’s Addiction played Jimmy Kimmel Live!, while the Joy Formidable rocked Late Show With David Letterman. Watch videos of their performances below (via The Audio Perv).

Lollapalooza founder Perry Farrell and his cohorts in Jane’s Addiction are set to release their first new album since 2003’s Strays, titled The Great Escape Artist, on October 18. Swathed in lasers on the Kimmel stage, the alt-rock icons played a cut from the new LP, “Irresistible Force”– a surging anthem complete with a towering guitar solo– followed by the spastic funk of oldie “Stop!”, off of 1990’s Ritual de lo Habitual.

Barring a drastic change of hairstyle, there’s unfortunately no sign of TV on the Radio’s Dave Sitek, who plays guitar on the new Jane’s Addiction record. “I’m just happy that we’re friends and writing partners,” Farrell told SPIN earlier this year. “He’s like a pretty girl that I’m sleeping with but don’t have to marry.” Check out the video for comeback track “End to the Lies” The Big Roar. Bryan spits out her lyrics about an invisible friend with a forceful panache that’s somewhere between Hayley Williams and Morrissey, and when the song explodes into its bone-rattling conclusion, it’s tempting to wonder what Letterman thinks of all this racket. He likes it, he says afterward. There’s a Wales/”whales” joke.

The Joy Formidable previously unveiled a live video of “Whirring,” stretching the feedback and atmospherics to nearly the eight-minute mark. The song originally appeared in abbreviated form on the band’s breakout EP, A Balloon Called Moaning. “It was just a great opportunity to capture what a beast that song has turned into live, and be very truthful to it,” Bryan told SPIN in February.