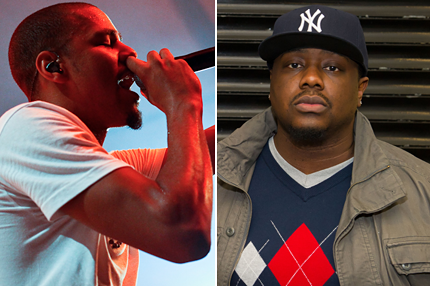 Phonte Coleman, one half of electronic R&B duo the Foreign Exchange, and formerly of defunct Durham, North Carolina, rap group Little Brother, declares at the start of his solo debut Charity Starts At Home: “I do this all for hip-hop.” Then he pauses and laughs, “I’m lying like shit, I do this for my goddamn mortgage.”

The album title makes clear that lofty goals like changing the world, one conscious rhyme at a time, have been replaced with something more practical. Phonte’s excellent, poignant album is paradoxicallyfocused on decidedly un-hip-hop things: Getting older, realizing rap doesn’t move him too much anymore, the fuck-ups of family and friends, having a wife and kids and lots of bills.

On “Good Fight,” over a soulful beat from friend-turned-enemy-turned-friend-again 9th Wonder, Phonte sympathizes with the working dude’s economic woes in one breath (“Five-dollar gas and poverty rates are rising much higher than your hourly rates”) and talks pragmatic good sense in the next: “If you’re thinking about quittin’, you should probably wait / Because everybody gotta do a fuckin’ job that they hate.” This has always been Phonte’s approach to songwriting. He was a truth-teller and voice of reason back when hip-hop was a lot less reasonable.

And he spoke up about major-label fuckery before it was quite so common, having gone through it with Little Brother, who signed with Atlantic and, then, after refusing to change their sound to chase hits, were dead in the water. There’s probably no Kanye, obnoxious, ambitious, hilarious, without Phonte. Drake, sensitive, smart, able to sing and rap and twisted up about damn near everything, cites Phonte as a major influence. Big K.R.I.T. makes a guest appearance on Charity Starts At Home — for a reason, all right?

Fellow North Carolinan J Cole, who released his official debut album, Cole World: The Sideline Story, last week, owes a debt to Phonte, as well. The MC/producer with a “conscious” but not too conscious style, quickly went from being one of many rappers on the blogs with a good mixtape (The Warm-Up, released in June 2009) to Roc Nation’s inaugural artist, rapping the last verse on the last song on Jay-Z’s Blueprint 3 (released in September 2009).

A year later, though, on the very same day that Cole released his much-anticipated Friday Night Lights mixtape, Jay-Z announced another Roc Nation signee, underground enigma Jay Electronica. Calling that move counterintuitive is kind; it’s insane. But this is how record labels work. Then you think harder and realize that Cole’s Blueprint 3 verse was on “A Star Is Born,” more a cynical dismissal of the next big thing — Jay disses all of hip-hop history on the track–than a passing of the torch.

Even after Jay-Z got bored with J Cole, though, the younger MC stayed gaining fans with his sincere, almost shocking regular-guy-ness, culminating in Cole World’s release. It’s projected to sell 250,000 copies in its first week. Not bad for a guy whose boasts are aggressively average: “Bitch, I made this in the crib, watching Belly / Eatin’ peanut butter jelly.” But that’s J. Cole and that’s interesting modern hip-hop, too: A dude in his house in some small-ass town knocking out beats, watching rap movies, eating PB&J.

For some perspective, B.o.B, who has had bigger dumber hits than Cole World’s “Work Out” or the Jay-Z assisted, dubstep-tinged “Mr. Nice Watch,” sold just 84,000 his first week out. And Bobby Ray’s Excellent Adventure, or whatever it was called, has never taken on loaded topics with the whip-smart fearlessness of Cole, whose “Never Told” confronts the male compulsion to cheat, but also questions the whole dumb idea of patriarchy; “Breakdown” talks about his father’s absence and his mother’s drug addiction and brashly lashes out at crack rappers.

“Lost Ones” is a back-and-forth from the perspective of a young couple confronting an unwanted pregnancy. Cole raps the parts of both the guy and the girl — think of it as a more serious version of Positive K’s “I Got A Man” — and the girl not only has a fully-formed voice, she cogently expresses why abortion is a difficult decision and, you know, something a man just can’t decide.

Jay-Z’s self-satisfied shadow still looms over the album, though — by force, on the awkward “Mr. Nice Watch,” but also on “Sideline Story,” where J Cole, honest to a fault, feels compelled to address Hova’s half-assed support: “Some nigga ask me why Jay never shout me out / Like I’m supposed to give a fuck?!” J. Cole totally gives a fuck though! He’s got an A-student’s obsession with success that seems, despite Cole World’s sales and comparative quality, a little bit delusional.

Once again, we go to Phonte and Charity Starts At Home’s opening track for some perspective. On “Dance In The Reign,” he is similarly confronted by someone else’s definition of success. But the rap veteran deals with it more honestly than Cole. A fan says, “I worry about you in the rap game,” and Phonte, who actually doesn’t give a fuck, responds by penning a powerful mission statement for hip-hop in 2011: “Motherfucker, go and get a real problem / Please, beg pardon, but I’m not starving / This rap shit is not the life I live / It’s a tool that I use — that’s it / No great fortune to show for it / But fortunate that no one can say, ‘His life ain’t his’ / Some might even say ‘underachiever,’ because they are not believers that I don’t want the world / But I done seen the world, and if you ever saw it, hell, you wouldn’t want it, either / I don’t need a kingdom, I just want a home.”

Right now, J Cole doesn’t have to ponder what Phonte’s saying — 250K first-week sales certainly will satisfy Shaun Carter, as well Cole’s ego, at least for a little while. But there’s still the nagging suspicion that the message will resonate all too soon.