'I was like, 'Guys. My face is burning,' ' says singer/keyboardist Hannah Hooper 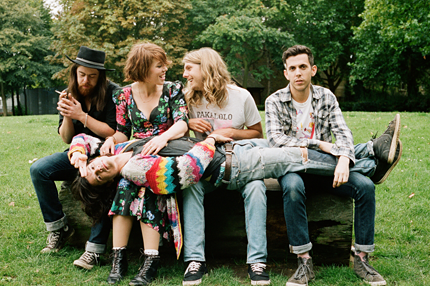 For SPIN’s November “Funny” issue, SPIN photographed Breaking band Grouplove during a day off between appearances at U.K. festivals. The Los Angeles freak-folk quintet led us all around London, eventually stopping to pose in an English garden, sectioned off in a corner of a public park. Singer-keyboardist Hannah Hooper frolicked and rolled around in the grass and foliage, and soon found out why, exactly, the garden was isolated: poison oak!

“I was really getting into the grass,” Hooper tells SPIN, “and right after we left I was like, ‘Guys. My face is burning!’ It felt a lot like poison oak, which I’d had numerous times because my parents lived on a farm in Northern California and I always went exploring in the woods. We sent a picture to our manager’s dermatologist, and he was like, ‘Yep, that’s a horrible case of poison oak on your face!’ ” Um, sorry about that, Hannah. To add irony to injury, the band does have a song called “Itchin’ on a Photograph.”

The rash persisted through two weeks of gigs, including an album release show for their debut effort, Never Trust a Happy Song. But Hooper soldiered on and “just dealt with it.”

“I tried sitting on my hands so I wouldn’t itch my face,” she says. “I tried to dry it out with some weird over-the-counter pharmaceutical thing this lady recommended, and it just started looking like I had a five-o’clock-shadow [laughs]. But you got to be a trooper. Touring makes you stronger. All those things you think are important you just throw out the window: Hygiene. Laundry. Healthy food.”

With their debut barely a month old, Grouplove were surprised by the fan devotion they’ve discovered on their first headlining tour. “This one guy at Reading [Festival] pulled his pants down and had ‘Group’ tattooed in really big letters on his thigh,” Hooper says, referencing the matching tattoo all five band members have inked on their wrists. “He’d just gotten it, so it was in this gross, bloody, scabby phase. It was a shocker.”

Grouplove’s tour culminates next week with a special homecoming show at L.A.’s El Rey Theater, where the quintet will play for an audience that “really rock out and remind us that what we’re doing is right.” On November 18, they’ll play their catchy new single “Colors” on Late Night With David Letterman. “Just saying it out loud, I feel like I’m lying,” Hooper says of the upcoming Letterman gig. “I tried saying it now just to see if it felt real yet. Nope. It still doesn’t.” Well, thankfully success doesn’t itch.