How Michael Stipe Taught Thom Yorke to Be a Frontman

'The things he was choosing not to do, not to be, were even more powerful than what he did,' Yorke tells Rolling Stone 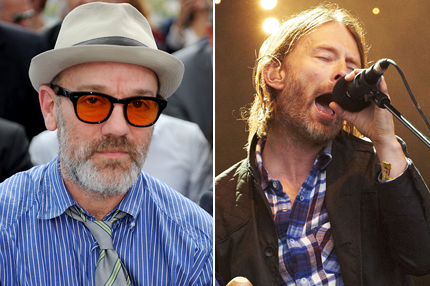 Contrary to what coverage of Radiohead’s shows at New York’s Roseland Ballroom last month might suggest, the band’s interpolation of R.E.M.’s “The One I Love” into Kid A opener “Everything in Its Right Place” wasn’t a one-off gesture honoring the alt-rock pioneers’ still-fresh breakup. In fact, Thom Yorke and Co. have been quoting the hit from R.E.M.’s 1987 Document for at least a couple of years, at shows in Japan, Mexico, Chile — you name it.

So it’s only fitting Yorke would have a unique perspective on the band’s career — other than a few guys named Bono and Mick, there aren’t too many members of the small club of folks who have fronted the same band for three decades. Rolling Stone asked Yorke about R.E.M.’s demise, and Yorke revealed Stipe had warned him about the breakup before the news went public, via text.

Yorke recalls that he first saw R.E.M. live in 1989, and tells RS he learned a huge amount on the road when Radiohead served as an opening act during the Monster tour. “He would mumble this crap between songs, like he was talking backwards,” Yorke says of Stipe. “He wasn’t even attempting to be like, ‘Hey, everybody, how ya doing?’ It was this completely evasive thing. But at no point did you ever get the sense he was running away. Everything was just going into that, onto the stage.”

Stipe’s way of distancing himself in order to throw his whole being into the performance makes sense to Yorke now. “The things he was choosing not to do, not to be, were even more powerful than what he did,” Yorke tells RS. “There was this air of deliberately a little fucked up… I liked that.”