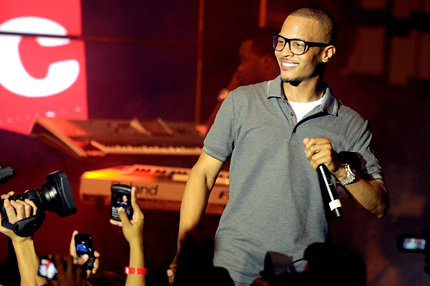 Wasting precious little time, T.I. has gone straight from the clink to the lab. After an extended prison stay, the Atlanta rapper is considering Kill the King and Trouble as potential titles for his follow-up to last year’s No Mercy, according to Rolling Stone. On Tuesday, he talked to Howard Stern about prison brawls, and then put on some collegiate-looking glasses to chat with Barbara Walters and her co-hosts on The View about his new novel, Power & Beauty. He’s also been rapping.

“Hear Ye, Hear Ye,” which has been spelled differently pretty much everywhere it’s been posted, pairs T.I. with fellow Southerner Pharrell Williams. Premiered by Hot 97’s Funkmaster Flex, the track should please the “real rap” contingent, dodging hooks and instead letting Tip and Pharrell exchange hard-edged rhymes over a hammering beat topped with regal horns. The message: The self-proclaimed King of the South is back. T.I. follows through on his boasts with an extended closing riff that involves castles, “opinionated peons,” and exactly where us peasants can stick our two cents. Sounds like Jay-Z and Kanye West aren’t the only ones watching the throne.

Speaking of those two, T.I. also recently jumped on a remix of their “Niggas in Paris” and he’s also got verses on remixes by Lil Wayne and Drake reportedly on the way. All that follows T.I.’s single with Big K.R.I.T., “I’m Flexin’.” Hey, in this economy, even royalty has to hustle.