Jack White and Bob Dylan are among the artists putting music to the country giant's final lyrics. 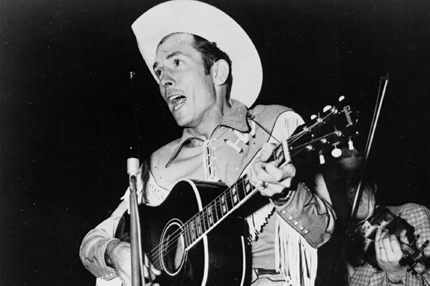 Jack White, NOrah JOnes, Bob Dylan, Lucinda Williams, and other artists put their own music to lost lyrics by country legend Hank Williams for a new collection called The Lost Notebooks of Hank Williams, due out tomorrow, October 4. Hear a preview of the set via NPR.

The tracks currently streaming are Dylan’s waltzing lament “The Love That Faded,” Jones’ smoky-voiced ballad of lost love “How Many Times Have You Broken My Heart?,” and country star Patty Loveless’s playful “You’re Through Fooling Me.” Each arrangement is rootsy, with a bit of country twang and, in the case of the Dylan and Loveless, even fiddle.

You can hear 30-second samples of the compilation’s nine other tracks over at Amazon, including the White Stripes axe-man’s drawling, accusatory “You Know That I Know,” Williams’ bittersweet acoustic tear-jerker “I’m So Happy That I Found You,” and Merle Haggard’s regally religious boot-stomper “The Sermon on the Mount.” Williams’ granddaughter, Holly, sings the steel-guitar weeper “Blue Is My Heart.”

Some of the lyrics come from a briefcase that Williams left behind when he died, at age 29, on January 1, 1953. Producer Mary Martin, who organized the collection, approached Bob Dylan early in the process. “At that time, the idea was to have one particular brave singer-songwriter view the lyrics and choose 12,” Martin told NPR. “Bob Dylan held those lyrics for over a year and a half, and I do believe that it was too mighty a task. So he suggested that he would do one, and then we decided it should be a compilation record.

As for White, he hasn’t only been lending his voice to country icons’ unfinished songs. The Raconteurs — White’s band with Brendan Benson, Jack Lawrence, and Patrick Keeler — recently ended a three-year hiatus with their set at the inaugural MI Fest.