Has Britpop’s Biggest Feud Between Blur and Oasis Finally Ended? 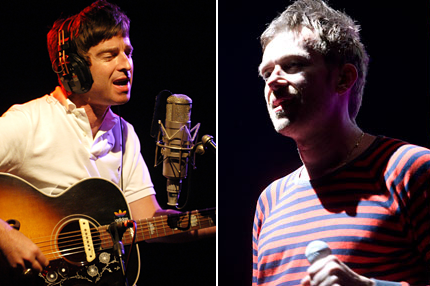 A day without an outrageous quote from one of Oasis’ Gallagher brothers is like a day without sunshine. In one interview, Liam says he’s never heard Radiohead’s OK Computer. The next, Noel calls Oasis’ latter years “a sham.” But while we usually take any Gallagher-related press clippings with a champagne supernova’s worth of salt, Noel’s latest revelation still comes as something of a shock.

The most vicious band rivalry of the Britpop ’90s has come to an end, the former Oasis guitarist and singer has suggested. In an interview with Shortlist magazine, Gallagher says he bumped into Gorillaz maestro Damon Albarn, formerly the lead singer of bitter Oasis nemesis Blur, and the two not only shared a brew, they had a laugh about their previous war of words.

“Funnily enough, when I was out last night, I bumped into him,” Gallagher is quoted as admitting. “I literally haven’t seen the guy for 15 fucking years and I bump into him in some club. We both went, ‘Hey! Fucking hell!’ and then he said, ‘Come on, let’s go for a beer.’ So, we’re sitting there, having a beer, just going, ‘What the fuck was all that about 15 years ago? That was mental.’ Then he said, ‘It was a great time, though,’ and I was like, ‘Yeah, it was a fucking good laugh.’ It was cool, man.”

The feud between Oasis and Blur dates to 1995, when the U.K. media played up the differences between the two bands. Blur were middle-class London suburban kids who went to art school. Oasis were a working-class Manchester band who liked to drink and get in fights. Also, Noel Gallagher said something back then in British newspaper the Observer about how he hoped Albarn and bassist Alex James would “catch AIDS and die.” So basically, there’s a whole lot of water under that bridge.

And water under the bridge is all it is, Gallagher insists. “Look, like I said to him last night, you can say that you respect someone as an artist a thousand times and it will never get reported,” he tells Shortlist. “But you call someone a cunt once… you know?” To put this in a little more perspective, however: As recently as 2008, it was news when Gallagher told the NME he was “indifferent” to Albarn. So the idea of the two chatting over drinks is still pretty hard to imagine. Would they even drink the same kind of beer? Who bought? So many questions.

Another notable aspect of the Oasis-Blur debate is how their roles continue to reverse. A key moment in the rivalry came when the two bands released singles for their mid-decade albums on the same day, a moment much hyped in the British press. Blur’s “Country House” topped Oasis’s “Roll With It” on the U.K. charts, which for years looked like a case of winning the battle but losing the war, as Oasis went on to see much more U.S. commercial success than Blur ever could.

“I’m not like Damon Albarn, who can seemingly turn his hand to any fucking thing he wants to,” Gallagher says in the same Shortlist interview. “I have certain parameters.” We do know this much: Within those parameters is an almost-preternatural ability to say highly quotable stuff.