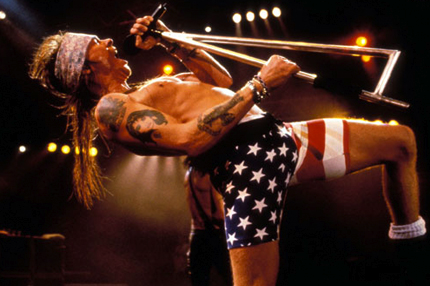 Last seen cursing out an annoying Nirvana conspiracy theorist, rock’n’roll jack of all trades Duff McKagan will be heading back out on the road with Guns N’ Roses — only this time as a supporting act. The bassist’s band Loaded (and not his other band, Velvet Revolver, which is still seeking a new frontman), will open some shows for GN’R, Axl Rose has revealed. VH1 Classic’s “That Metal Show” co-host Eddie Trunk broke the news in a tweet after a rare interview with Rose on Sunday morning.

“We did ask Axl about R&R Hall, new music, this lineup, playing with Duff (said Loaded will open shows) and more,” Trunk said in a tweet. The Loaded opening slots would follow an unannounced guest appearance McKagan made with GN’R in London about a year ago, Blabbermouth notes. The October 14, 2010 gig was reportedly McKagan’s first performance with Rose in 17 years.

The hour-long Rose interview, airing on VH1 Classic on November 11, was itself a long time in the making. The interview took place within hours of GN’R’s Miami concert, but not before a series of tweets from Trunk about waiting up all night for Rose to appear. “5:30 AM, got to this arena at 3P yesterday. Still here…. If this interview happens I might dose off for the first time ever in an intv,” Trunk said in one tweet. Later he thanked the crew for putting in a 15-hour shooting day. Trunk last interviewed Rose for a radio show in May 2006.