Florence Welch dons a mask in the vaguely sinister clip for "Shake It Out," the second song from her forthcoming second album. 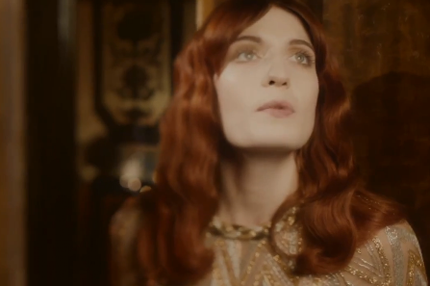 Just in time for your Halloween-party preparations, Florence Welch attends a mask-heavy gathering in the video for “Shake It Out,” the second song to emerge from Florence + the Machine’s upcoming second album. Watch the clip below.

“Shake It Out” and previously unveiled track “What the Water Gave Me” are slated to appear on Ceremonials, the follow-up to last year’s Lungs. Both songs are surging pop tunes that put lush, gospel-tinged arrangements beneath Welch’s powerhouse voice.

Ceremonials is scheduled for U.S. release on November 1 via Universal Republic. The album was recorded at London’s famed Abbey Road Studios with producer Paul Epworth, who oversaw Lungs’ “Cosmic Love” and “Blinding” in addition to his work on hits by the likes of Adele and Bloc Party.

The masquerade scene in the video isn’t Welch’s first encounter with the dark side. In a SPIN profile earlier this year, Welch, one of our Best Artists of 2010, cops to breaking into a cemetery.

WATCH: Florence and the Machine, “Shake It Out”