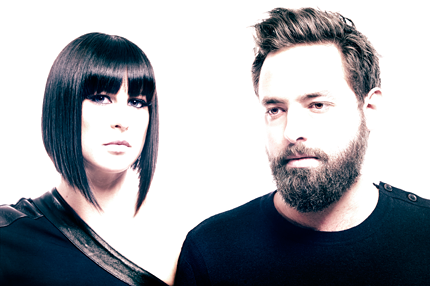 Next Tuesday, Barsuk will release Phantogram’s Nightlife EP, the New York electro duo’s brief but bold follow-up to last year’s Eyelid Movies. Just before their recent show at the Metro in Chicago, Josh Carter and Sarah Barthel tried remembering how each of these six songs was born. (They mostly succeeded. OutKast came up.) Check out what they had to say while you spin the full EP:

“16 Years”
Josh Carter: “This was a song that I wrote as a demo a few years ago, having recorded myself just singing gibberish in falsetto on the road. I ended up translating that into something that made a lot of sense to me. Sometimes, if I’m writing a song, or if we’re writing a song together, we’ll often sing gibberish because it seems to spawn ideas. It gets the juices flowing in a way.

“Don’t Move”
Sarah Barthel: “Josh wrote that beat about two years ago and we used to play it sometimes after our set as exit music for everyone to leave to. We were jonesing to put out some music at the time, but it wasn’t possible since Eyelid Movies had just come out. What we wanted to see was how people would react to it. “
JC: “Yeah, we wanted to put the bug in their ear sub-consciously. They had no idea what they were hearing.”
SB: “I just loved the beat so much and Josh ended up writing the lyrics this past summer while I was living in the city. We started sending it back and forth over e-mail. I think it’s actually the first thing that we’ve done that with.”

“Turning Into Stone”
JC: “That was another song that I wrote on tour, right around SXSW in March. We’ve been on tour most of the past two years, but this one came together after I stumbled across some horn samples in old jazz music. I made a beat and started messing around and miraculously, the lyrics just kind of came around. Sarah and I listen to all kinds of music and I’m constantly looking around for samples. We probably listen to jazz and classical and old soul music and avant-oddball music more than anything that’s coming out right now. For inspiration, anyway. That’s usually where my samples come from. I was in a strange place this past winter and that was a lyric that came quickly as a result. The chorus goes, ‘It’s a new day and I’ve got a new way of turning into stone.’ What that meant to me is that it’s a new day and I’ve got another way of masking my problems — I’m shutting off the outside world.”

“Make A Fist”
JC: ” ‘Make a Fist’ was a record that we had written for Eyelid Movies but we didn’t feel like it was finished. On our most previous tour, Sarah and I got together and spritzed it up, made it more hypnotic.”
SB: “Beat-heavy.”
JC: “And beat-heavy. We added a crescendo at the end and we really figured out a way to make it a better tune than it was. That song had basically written itself.”
SB: “That crescendo makes it so much more dynamic. There’s a lot of emotion there now.”

“Nightlife”
JC: “It’s definitely my favorite song on the EP. Sarah had written that opening riff on guitar and she already had a melody in mind as well. We had a brief break from touring and my cousin let me borrow her classical guitar so I started recording those guitar parts. Sarah added another and then we ended up coming together to finish and develop it even more. It hits me really hard. Just a beautiful song.”

“A Dark Tunnel”
JC: “It was the trickiest track. I had written the first bit and thought it was a cool idea, like OutKast meets Nine Inch Nails. I actually don’t know what I was thinking. Like I said, last winter was a strangely dark period for me. I wanted to throw this one away; I tried throwing it away a bunch of times. But Sarah loved it so much and she convinced me to finish. It’s a really cool juxtaposition of ideas. It starts dark and opens up, like there’s actually a light at the end of the tunnel.I really, really didn’t want to finish it, but Sarah liked it so much she resuscitated it. I’m glad she did. I’m happy it’s out there. It’s an interesting representation of us as a band. “