The Toronto chanteuse and her 24-piece orchestra debut songs from 'Metals' in the crypt of Harlem's Church of the Intercession. 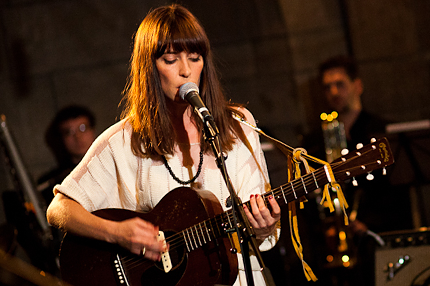 In 2007, Leslie Feist found pop success with her third album, The Reminder, and its uplifting single “1234” and colorfully choreographed music video, which was featured in Apple’s iPod commercial and landed Feist on Sesame Street. Four years later, the Toronto chanteuse has something more expansive and brooding in store on her just-released fourth album, Metals. Monday night she recreated the new sound during a concert celebrating the LP’s release — which was held in the crypt of a New York City church.

At 9 P.M. sharp, 150 fans — Vampire Weekend’s Ezra Koenig, Grizzly Bear’s Ed Droste, and the Strokes’ Fab Moretti included — were led out of the rain on Manhattan’s West 155th Street and into Harlem’s Church of the Intercession. They were instructed to turn off their cell phones, given one last chance for a bathroom break, and then escorted outside onto the church’s private grounds, through a spooky old graveyard, and into another building. They walked down a steep, dark staircase — “Watch your step!” the staff warned — and into the church’s chapel crypt. There they stood beneath robust arched columns and a dimly lit chandelier adorned with rectangle-shaped slabs of metal – cooper, aluminum, etc. – meant to riff on the LP’s title. Leaves spray-painted gold were strewn about the floor.

The two-hour show was the ideal introduction to the new, more expansive Feist. Metals largely abandons upbeat pop for an experimental chamber pop sound that’s so lush in instrumentation that the 24-piece accompaniment is necessary. Lyrically, the album explores darker themes of personal struggle and complex relationships and their troubles.

Feist’s band played an arsenal of instruments to recreate Metals’ intensely rhythmic and dynamic sound, including cloaks adorned with bells worn byMountain Man and Spearin’s use of a drum stick to whack two violins, which were clamped to his table. They toyed with everything from pedals and digital effects machines to children’s recorders and xylophones, and at one point six members of the band shook tambourines in unison, while the drummer delicately tapped his kit with planks of wood.

The show opener, Metals’ “A Commotion,” set the experimental tone with chattering, steely guitars and group shouts. Feist’s guitar style was at times atonal; she interjected short, two-bar solos between mournful chords”The Bad in Each Other” and “The Circle Married the Line,” both new songs.

Also a highlight were folky ballads “Get It Wrong, Get It Right,” a tender mediation on love with a lilting melody and floating-in-the-clouds keyboards, and “How Come You Never Go There,” the LP’s first single, with its a lovely acoustic groove and “whoa, whoa, whoa” vocals. “Caught a Long Wind,” perhaps the most gorgeous and affecting of the bunch, was a spare tune with piano, acoustic guitar, and subtle strings. It built to a shimmering crescendo which had Feist wailing over clacking rhythms, “I caught a long wind / Like a swallow / I got to know the sky.”

Fittingly for the venue, Feist’s transformation was clearest on “Graveyard,” arguably Metals’ most vital track. “Whooahhh / Bring it all back to life!!!” Feist crooned in her honeyed voice, while romping side-to-side in her vintage white lace dress. The sound grew and the audience cheered mid-song in what was the night’s biggest moment. After the applause died, Feist led the crowd in a sing-along of the chorus, their voices reverberating off the sculpted arches of the crypt. “That song feels like I sent roots down to different caverns that I didn’t even know were in me,” Feist had previously told SPIN. “That’s the most important track on the record for me.”

Feist and her band retreated briefly behind the chamber door, while the crowd started a chant of “Whooahhh / Bring it all back to life.” She soon returned and led the band in another few verses of the “Graveyard” chorus. It was her new mission statement — and her musical resurrection.

William Goodman
Tags: feist, We Were There