LIsten to "End of the Dream," off their October 11 album, which will stream on SPIN.com starting Friday. 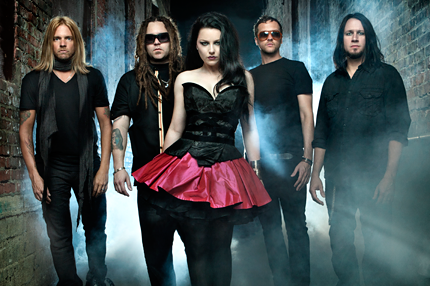 It’s taken five years for Amy Lee to solidify Evanescence’s latest lineup and complete their third album, a self-titled effort that arrives in stores Oct. 11. Check out SPIN’s exclusive premiere of the track “End of the Dream” here. And return to SPIN.com on Friday, October 7, when we’ll be exclusively streaming the entire 12-song LP.

“End of the Dream” launches full bore with chunky guitar, then falls into a brooding grove with piano underpinning Lee’s unmistakable vocals. “Follow your heart ’til it bleeds,” she wails in the chorus, evincing the track’s “seize the day” message. “‘It’s about understanding that this life isn’t forever, and how you have to live it, embrace even the pain, before it’s all over,” Lee tells SPIN. “As much as it hurts, it just means you’re alive. So don’t be so afraid to get hurt that you miss out on living.”

Since 2006’s The Open Door, which sold more than 5 million copies, Lee retooled the band’s lineup, scrapped an electronic-leaning set of songs recorded with famed producer Steve Lillywhite, then regrouped for the homestretch of recording, infusing new synthetic sounds and songs written on harp into the finished product. (Read more here.)

“End of the Dream” follows the recent release of a video “What You Want,” the album’s opening track. Watch it below, and return to SPIN.com on Friday to hear the whole album and read about each band member’s favorite new tune.