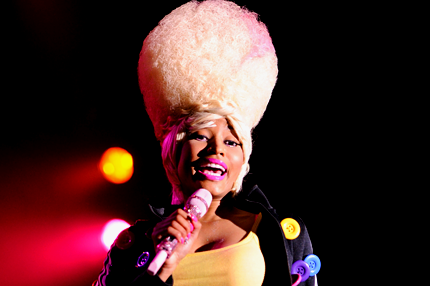 When Lil Wayne signed Nicki Minaj to his Young Money imprint, the New Orleans-born hip-hop giant might have seen a little bit of himself. Donning pink-tipped blonde dreadlocks and a faraway look, Minaj perfectly embodies the stoned quasi-profundity of a Weezy interview in a recently posted video. If being able to mimic your boss counts for anything, the ever-colorful New York MC should be ready for that Hollywood role she reportedly craves sometime soon.

The seven-minute clip eventually starts to drag, but not before Minaj nails a few indelibly Wayne-ian moments. Asked by the cameraman what inspired the new hair color, Nicki-as-Weezy explains with perfectly circular logic, speaking in an emphatic yet halting, New Orleans-tinged drawl: “I am inspired. I — I’m inspiration. I always inspire. Can’t nothin’ inspire me. Ya dig?” Why, it’s just like watching 2009 Lil Wayne documentary The Carter. Pass the cough syrup. (Or not.)

As for the real Lil Wayne, he’s not resting on the commercial success of the latest installment in his Tha Carter series. Young Money Records President Mack Maine told MTV News that Wayne is working on sequels to 2010 albums I Am Not a Human Being and Rebirth. Some of his best work has come in his Dedication and Da Drought mixtapes, but on second thought, given some of the stale punchlines on Tha Carter IV, maybe he shouldn’t start sullying those legacies just yet. Especially not while Nicki is at her post-Pink Friday best.