Plus: Weezy plans his retirement to focus on raising his children 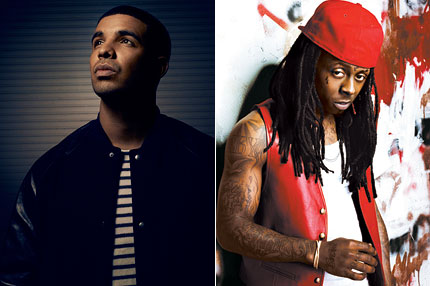 Drake and Lil Wayne are bona fide rappers, but, damn, they make one hell of an R&B song. “The Real Her,” which may or may not be slated for Drake’s upcoming Take Care, dropped online Friday and it’s a silky-smooth, ethereal R&B jam reminiscent of Drake’s fellow Torontonian the Weeknd. Download the song at the Smoking Section.

Echoing vocals. Warped piano. Dripping effects. Spare beats. Drizzy crooning about a late night partying with a girl, who has clearly “done this before. This can’t be your first time.” It’ll heat up your collar. Then Weezy enters. “To her I’m just a rapper,” he slowly rhymes. No, Weezy, you so much more.

He is — and not just an R&B smoothy. The 29-year-old Weezy recently spoke to GQ, saying that he hopes to quit the game by 35 to focus on another career: fatherhood. “The main reason is my kids,” Weezy said of his upcoming retirement. “Six [more] years, I can do this Lil Wayne thing, and my boys will be about 7 and 8 years old. And man, it’s all about them then. You know, whatever they’re doing. Sports. Whatever they’re into. That’s where I am. I’m at every game. I’m the dad with the hat on. The jersey. That’s me.”

He also wants to focus on releasing other artists on his Young Money label. “I’ve only put out two artists [Drake and Nicki Minaj]. I have a lot more work to do, and it’d be selfish to not focus on being the boss and focus on their projects.” Sure thing, Wayne, but isn’t Rick Ross the boss?