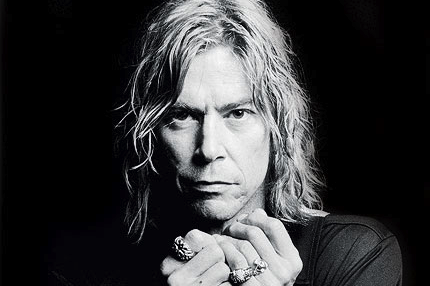 This is what happens when you disrespect Duff McKagan. The former Guns N’ Roses bassist and current member of Velvet Revolver and Loaded visited Seattle University last week to sign his new memoir, It’s So Easy and Other Lies. As the Seattle Post-Intelligencer recounts, that’s when McKagan got a question from a local man who’s notorious for claiming that Kurt Cobain’s suicide was actually a murder.

McKagan, a Seattle resident, says he was among the last people to talk with the Nirvana frontman before his death. His questioner, a former Seattle mayoral candidate named Richard Lee, has been slapped with restraining orders by Nirvana bass player Krist Novoselic and others close to Cobain, and he was raising his usual Kurt questions at the book event. McKagan summarily dismissed him, in no uncertain terms: “Get the fuck out of here.” If you can kick addiction, as McKagan has, then kicking out an irritating town gadfly is probably no big deal. Watch McKagan be awesome below: