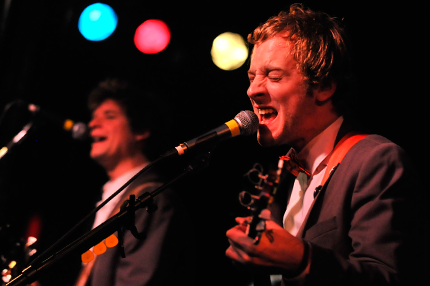 Deer Tick’s beer-soaked new record Divine Providence comes closer than any of their previous albums to capturing the band’s famous onstage chaos. But last night’s tour kickoff at the Met (near their Providence, Rhode Island home town) might be one of the few times where they actually sounded rowdier on record than onstage.

Frontman John McCauley strode onstage with a full six-pack of Budweisers and a serious limp from a sprained ankle. The band was weary, having spent the morning in New York sound checking for an appearance on the Late Show with David Letterman (they shared that bill with former president Bill Clinton). Donning the same tight, grey suits they wore hours earlier for the taping, Deer Tick turned out a boot-stomping, shout-along set, but many of the songs lacked the recklessness that makes the new album so much fun.

McCauley has one of those great serrated rasps that sounds like a garbage can singing with a cigarette hanging from its lips. But his vocals felt underwhelming on some of the new album’s best barroom howlers, like “Something to Brag About” and “The Bump.” The boisterous crowd gave the latter song’s backup vocals the energy they deserve, though. He got more intense on older tracks like “Easy,” getting half of the plaid-clad crowd pounding their heels, and “These Old Shoes,” which pumped some needed life into the gig.

Most of Divine Providence’s tunes were well received, especially “Clownin Around,” which features drummer Dennis Ryan’s frayed vocals, but Deer Tick got the room bobbing hardest on their covers. McCauley recently said that their Nirvana cover band, Deervana, has likely broken up, but that didn’t stop them from doing a spot-on take of “On a Plain” for aroomful of kids who probably weren’t even born before 1991. And guitarist Ian O’Neil (formerly of Titus Andronicus) supplied blazing vocals on Chuck Berry’s “Maybellene.” The song brought one of the night’s few instances of strange spontaneity as it played alongside a commercial for BP — a giant screen was set up next to the stage so everybody could watch Deer Tick’s Letterman appearance in real time.

Deer Tick conveniently brought “Maybellene” to a cacophonous end just in time to watch themselves play “Main Street” on national television. Letterman called it “beautiful” and as soon as the TV rendition ended, the band played it live onstage.

Eric Magnuson
Tags: Deer Tick, We Were There