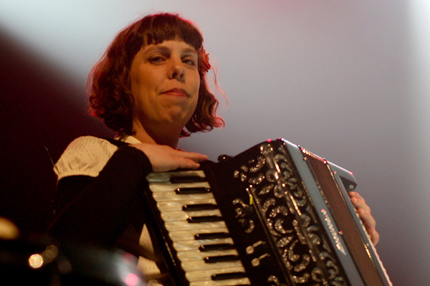 Jenny Conlee, keyboard and accordion player for the Decemberists, is in good health five months after the band announced she’d been diagnosed with breast cancer. Frontman Colin Meloy delivered the news via Twitter Thursday afternoon, writing, “For those of you wondering, saw Jenny this week; our girl’s officially in remission! #teamjenny #beyondchemodome.”

In May, the Decemberists posted a note on their website warning fans their “since-the-very-beginning accordion and keyboard player and all-around rad person” would be missing spring and summer tour dates to receive treatment, noting she had fortunately caught the disease in its early stages. “There are still a few unknowns out there concerning my cancer, but I am thinking positive and hope to be back on the road soon,” Conlee wrote at the time.

According to the latest news on the band’s website, it looks like Conlee may be hitting the road as soon as early November: “John, Chris, Jenny, and Nate will be joining forces with Peter Buck and Scott McCaughey to form the King Charles Trio, the backing band for John Wesley Harding’s upcoming November tour.” The site lists date starting November 5 in San Francisco and wrapping November 20 in New Jersey.

The Decemberists’ new collection of B-sides, Long Live The King, is due November 1, and their performance on Austin City Limits, which features cameos by Gillian Welch and David Rawlings, is scheduled to air tomorrow.