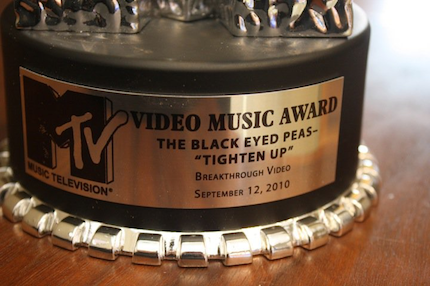 One year ago, the Black Keys received their Video Music Award for Breakthrough Video (“Tighten Up”) and learned MTV had mistakenly printed the Black Eyed Peas’ name on it. Some would argue that’s all you can expect from a network that literally removed the word “Music” from its name. Though MTV apologized, calling the incident a “clerical error,”, the Keys were unimpressed, and in a new GQ interview, when singer-guitarist Dan Auerbach was asked to revisit the incident one more time, he threw a few additional jabs at MTV. But he mostly picked apart the Peas.

His first reaction upon seeing the incorrect plaque: “I was just like, Wow. A channel that’s never respected us or played us to fuck us like that?” he told GQ, laughing. “I mean, MTV is kind of a joke now anyway — what’s more funny than that?” After hemming and hawing over whether to force MTV to give them new trophies, the band decided they needed the correct hardware. “We figured that we should get proper ones made with our names on it, because in 20 years, nobody’s going to know who the Black Eyed Peas are. We’d have this stupid award with Black Eyed Peas on it and nobody’s going to get the joke.” But it wasn’t quite that easy: The band learned they had to return the incorrect awards before MTV would issue new ones. Maybe the network was worried the duo would sell them. Remember, they’re hawking a pretty sweet van.