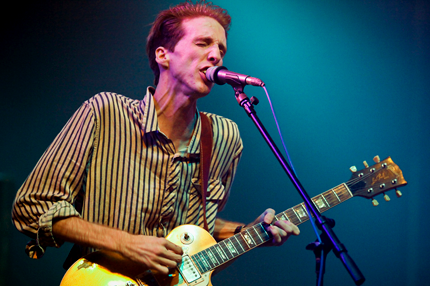 Bradford Cox has been all over the place lately, though not always looking quite like himself. The Deerhunter frontman recently turned up alongside MGMT on Late Night With Jimmy Fallon, and though the East Coast psych-rockers were covering Pink Floyd, Cox was wearing what looked like the same Joey Ramone costume he donned during a previous surprise appearance at a Black Lips show. On November 8, Cox will release the latest album from his Atlas Sound project, titled Parallax — and it’s hard to guess what Joey Ramone might say about the most recent LP track to surface.

Available as a free download from Amazon (as first pointed out by One Thirty BPM), the six-minute “Flagstaff” is half ambient-tinged singer-songwritery stuff, half-lulling electronic drones. In a sense, the folkier part of the song could be seen as a companion to Deerhunter songs like “Earthquake” or “He Would Have Laughed,” from last year’s stunning Halcyon Digest, only even more stripped down. “And the weird ones would stay,” Cox coos at one point, accompanied by his own spidery acoustic guitar figures.

And plenty of non-weird people might well want to leave amid the warmly flickering tones that end the song. But on an album that puts Cox’s familiar introspection on an interstellar scale, the eerily soothing sonic bath takes on greater significance. Think of it as like the moment in 2001: A Space Odyssey where Dave Bowman vanishes into the monolith, his famous last words:”My God, it’s full of stars!” Wherever Cox has been spending his time, the view must be breathtaking.