Amy Klein Leaves Titus Andronicus: ‘I Couldn’t Do It Anymore’

'There are a lot of other things I want to do with my life,' guitarist tells SPIN 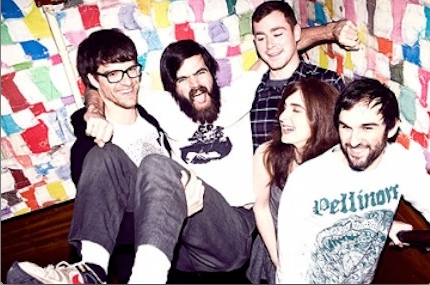 Amy Klein, the kinetic guitarist, violinist, and sole female in New Jersey punk rock outfit Titus Andronicus, announced she’s decided to quit the band in a blog post published over the weekend. There was no dramatic fallout, she tells SPIN, but after two years it was time to move on. “To commit to being in a band you really have to be giving it 100 percent all the time,” she says. “When I was thinking about another album cycle, another year of touring, I didn’t think I could do it anymore. There are a lot of other things I want to do with my life before I settle down.”

While she plans to focus on other music projects, including her Amy Klein and the Blue Star Band and rock duo Hilly Eye, Klein admits that she’ll also start scouring help wanted ads. With an English literature degree from Harvard already on her résumé, she also hopes to pursue an MFA in creative writing. But, for now, “I’ll need a new day job because Titus was my day job,” she says.

Liam Betson, who played guitar on the band’s 2010 release The Monitor, recently finished college and will join the group full time, she confirms.

Although her departure marks the band’s second shakeup in less than a year following bassist Ian Graetzer’s amicable split in January, Klein says the group was supportive. “Nobody was mad at me or anything,” she says. “We’re all in our late 20s and that’s when you figure out what you want to be doing with your life.”

In a blog post she hailed Titus the “great American rock and roll band of our time.” She also offered a few encouraging words to young girls with rock ambitions. “To any girl out there who still believes that she will always be a loser, let me answer you with a quote from [the Titus Andronicus song] No Future Part III: ‘That’s okay.’ I was one too. Trust me. You’re gonna be someone someday. It’s a crazy world we live in, one where even your biggest, loudest, wildest, rock’n’roll dreams can come true,” she wrote.

The boys in the band, meanwhile, also posted a poetic note on their website responding to the news. “Even I can barely comprehend it; she has become that vital a part of the band’s very identity,” they wrote. “Strange, and sad, to think that never more may we warm ourselves by the fire of her endless enthusiasm.”

Klein — who played with Titus at their CMJ showcase in Brooklyn last Tuesday — was a centerpiece at live shows, standing out as much for her ear-to-ear grin and gritty guitar chops as her gender amongst the often dude-dominated crowd. “What I’ll miss the most is the fans and how crazy they go at Titus shows,” she says. “I’ve never seen anything like it. But now I’ll be the one in the crowd freaking out as well.”

Titus Andronicus’ next show is November 14 at Le Poisson Rouge in Manhattan. Klein says Hilly Eye will begin work on a debut LP this fall.