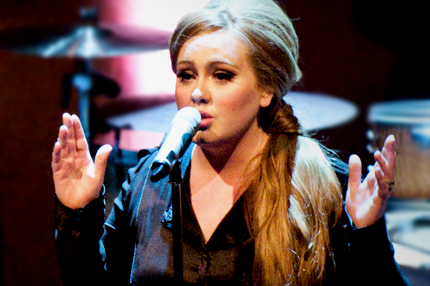 Throat problems forced Adele to cancel an already-rescheduled U.S. tour this month, and the pop singer also scrapped a performance at the Q Awards in London on Monday. Back on September 22, however, her hemorrhaged vocal chord was well enough to perform an epic set that’s turning into a live CD/DVD set — Live at the Royal Albert Hall hits shelves on November 29, the singer has announced. Considering her sophomore LP 21 is the world’s biggest-selling album of the year so far, the package will no doubt end up under plenty of Christmas trees this holiday season. Start stocking up, Santa.

Available on DVD and Blu-Ray, Live at the Royal Albert Hall contains Adele’s entire 90-minute London performance, along with “behind the scenes footage.” The video component comes with a live CD, compiling hits such as “Rolling in the Deep,” “Turning Tables,” and “Chasing Pavements.” The set also includes covers of Bonnie Rait’s “I Can’t Make You Love Me” and Nashville bluegrass band the SteelDrivers’ “If It Hadn’t Been for Love.” Check out the track list below, plus fan footage of “Someone Like You” from the concert. If you happened to catch Adele belting at MTV’s Video Music Awards this summer, you know why people are going to be excited about this.