The Chicago rockers hit 'Late Show With David Letterman' to perform songs from their upcoming album, 'The Whole Love.'' 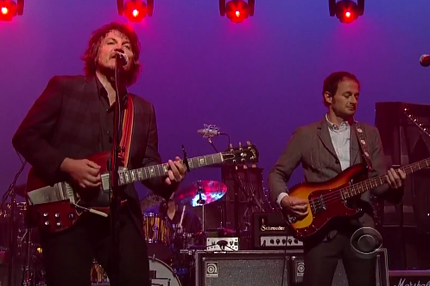 Wilco will release their eighth album, The Whole Love, on September 27. Wednesday night, the Chicago rockers hit Late Show With David Letterman to show off their new material. In addition to an on-air rendition of the record’s jauntily existential “Born Alone,” the band also played a full 63-minute set for the online audience. Watch the performance here.

Wilco kicked off their set with The Whole Love’s opening one-two punch: the fuzzed-out sprawl of “Art of Almost” followed by the bittersweet power-pop of “I Might.”

From there, the band stretched out, reaching back to 2002 landmark Yankee Hotel Foxtrot (“I Am Trying to Break Your Heart,” “Jesus, Etc.,” “War on War”) and 2004’s A Ghost Is Born (“Handshake Drugs”) amid a selection of newer songs (The Whole Love’s title track and “Dawned on Me”; “Impossible Germany,” from 2007’s Sky Blue Sky; and “One Wing,” from 2009’s Wilco (The Album)). They capped the set with rousing single “A Shot in the Arm,” from 1999’s classic Summerteeth.

“Did you get in here free?” frontman Jeff Tweedy asked the audience at one point during the online set. “Then there’s nothing to complain about. You will enjoy every second of this. It’s better when things are free.” Indeed.

The Whole Love album is streaming now in full over at NPR. Check out SPIN’s review of an early tour stop here. Tweedy also took to the stage recently to cover Black Eyed Peas.