The Auto-Tune R&B crooner wanders pensively in the video for his collabo with the weed-loving rapper and no-nonsense Brit singer. 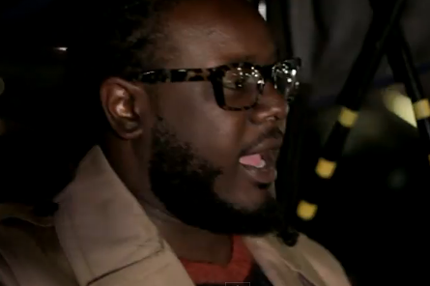 In early September, a new T-Pain song featuring Wiz Khalifa and Lily Allen surfaced on the Web. Now there’s a video for the track, titled “5 O’Clock.” Watch the clip here (via Nah Right).

It’s a pensive contemporary R&B ballad, with rumbling beats, pealing organs, and, of course, T-Pain’s Auto-Tuned lover-man vocals. The song will likely appear on T-Pain’s upcoming RevolveR, though more than a year after the “rapper turnt sanga” told MTV News the album was finished, a release date and other details are still uncertain.

Lily Allen’s contribution is a sample from her tender, piano-powered love song “Who’d of Known,” off her 2009 album It’s Not Me, It’s You. Though “5 O’Clock” samples the song’s first verse, in this context her hushed, lilting lines about sneaking up to a lover’s bedroom might actually be catchier than the original song’s chorus. Pittsburgh rapper Khalifa is better known for his weed talk, but his echoey rhymes here match T-Pain come-on for come-on.

According to Baller Status, the video is set in the streets of Amsterdam, perhaps not so far from Khalifa’s typical head space after all. A trench-coated T-Pain leaves the club and wanders home to his waiting woman, but first he — and sweater-wearing confrere Khalifa — have some thoughts to get off their chests.

T-Pain has collaborated outside the hip-hop and R&B realm before — with Taylor Swift, for instance.

Khalifa earlier this year released his major-label debut Rolling Papers, which had U.S. first-week sales of 197,000 copies, according to Billboard.

Allen married boyfriend Sam Cooper in June, and is reportedly expecting a baby.