The indie-poppers' somber take on 'Dark Side of the Moon' cut "Breathe" was part of the show's week-long tribute to the iconic rockers. 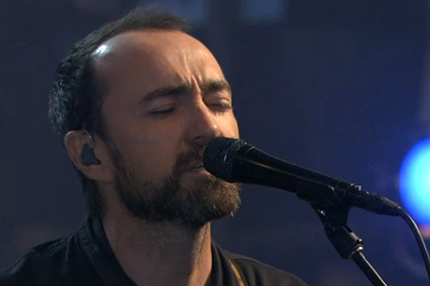 Late Night With Jimmy Fallon kicked off its week-long tribute to Pink Floyd last night with a performance by the Shins. Watch it below.

The Albuquerque, NM-born band covered “Breathe,” from the English rock giants’ 1973 blockbuster Dark Side of the Moon. Their somber, groove-oriented take on the stately prog-rock standard found singer-songwriter James Mercer’s voice settling into a slightly lower-than-usual register. It was his group’s first TV appearance in four years.

Fallon’s Pink Floyd tribute coincides with the band’s massive reissues series, which began this week with a six-disc box set edition The Dark Side of the Moon. As The Wall Street Journal’s Speakeasy blog points out, a giant inflatable pig– a nod to the band’s past– took flight yesterday over London yesterday to further promote the release. Fans can also watch The Greatest Gig in the Sky, a November 1974 Pink Floyd concert.

The Shins are expected to release a new album next year via Columbia Records, the band’s first album since 2007’s Sub Pop-issued Wincing the Night Away. Mercer and touring members Yuuki Matthews (bass), Jessica Dobson (guitar), Richard Swift (keyboards), and Joe Plummer (drums) are wrapping up a string of shows around North America. Their next date is October 15 at the Deluna Festival in Pensacola, FL.