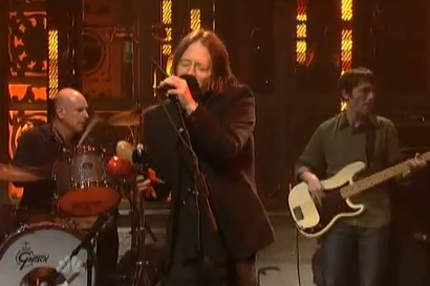 New York City has Fashion Week. It has Fleet Week. And on Saturday night, the city kicked off a several-day span stacked with performances by British rockers Radiohead. The band appeared as the musical guest on the Alec Baldwin-hosted season premiere of Saturday Night Live, playing The King of Limbs’ “Lotus Flower” and previously unreleased song “Staircase.” Watch both here (via The Audio Perv).

It was Radiohead’s first SNL appearance since 2000, when the group performed tracks from then-new album Kid A. This time around, the onstage electronics were hardly a surprise, as maracas-wielding frontman Thom Yorke danced twitchily at the microphone during the moody, haunting “Lotus Flower.” Yorke took to a keyboard but proved no less manically mobile during the bittersweet funk of “Staircase” — a King of Limbs outtake previously premiered on YouTube.

Radohead’s busy week continues Monday night with an appearance on a special one-hour episode of The Colbert Report. The group will play songs from their latest album along with previously unreleased track “The Daily Mail.”

On September 28 and 29, Radiohead will play a pair of shows at New York City’s Roseland Ballroom. Tickets are available today starting at 10 A.M. via Ticketmaster.

In other Radiohead news, anyone can now buy official guitar tablature for the band that once sang “Anyone Can Play Guitar.” At Ease points out that Radiohead publisher Warner/Chappell has begun selling downloads of “artist approved” sheet music for guitar and piano from each of the band’s albums.