Christopher Owens sports a half-shirt and rallies a classic American car in search of his "Honey Bunny." 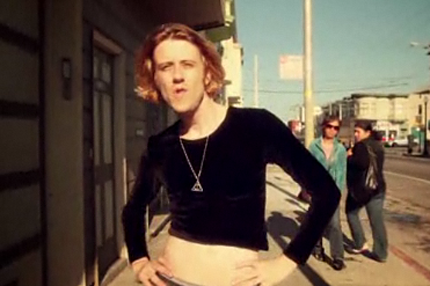 Girls frontman Christopher Owens has a taste for the finer things in life, like beautiful women and classic American cars, and he reminds us yet again in his band’s new video for “Honey Bunny.” Watch below [via The New York Times].

Directed by Girls bassist J.R. White, the two-and-a-half-minute clip shows Owens searching for his dream girl on the streets of his hometown San Francisco. He frolics around the streets in a half-shirt, and later steals a silver Corvette (remember, Owens loves sexy vintage cars) before finally spotting his blonde vixen (who is actually his real-life girlfriend). “I know you’re out there / You might be right around the corner / You’ll be the girl that I love,” Owens sings on the ’50s-style rock’n’roll track, from Girls’ sophomore album Father, Son, Holy Ghost.

Owens and White chatted with The New York Times about “Honey Bunny” and its video. “I wrote [the song] on my birthday in 2009, on my Mom’s front porch singing into my cellphone,” explains Owens. “It’s a song about making a conscious decision not to give up on love or hope or happiness.”

“It was an obvious choice to have Christopher’s girlfriend be the co-star,” says White. “Chris is not an actor, and including her was a conscious effort on my part to make him feel as comfortable as possible. I knew the video would depend tremendously on his performance to the camera.?”

Adds Owens, “The girl is very special and important in my life. She represents the girl that I’m looking for in the song.”