On what would have been the singer's 28th birthday, her rendition of jazz standard "Body and Soul" has premiered. 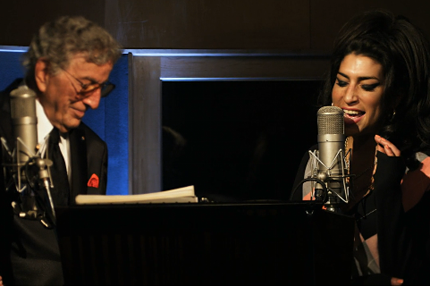 Amy Winehouse would have been 28 years old today. On the late singer’s birthday, Columbia Records is releasing her duet with Tony Bennett performing jazz standard “Body and Soul,” which her website calls “the final recording” Winehouse made before she was found dead in London on July 23. Video of Winehouse and Bennett’s studio session — a clip of which played during last month’s MTV VMAs — has been released. Watch it below.

The Amy Winehouse Foundation, which also launched today, will receive all proceeds from the single (available for purchase on iTunes). The charity, set up by Winehouse’s family and friends, will aid organizations that support vulnerable youth, such as those with addiction problems, the singer’s father told the Associated Press.

The “Body And Soul” video shows Bennett and Winehouse in the studio, with Winehouse swaying and smiling in the iconic “I Left My Heart in San Francisco” crooner’s direction. She looks up to skies after her first verse, as the two continue to exchange buttery, smoothly quavering vocals on the song, originally written in 1930. “I gladly surrender myself to you,” they sing, backed by piano and strings.

A separate interview clip on the foundation’s website shows Winehouse discussing her duet with Bennett — “Can I call him Tone?” she asks.

The two recorded “Body and Soul” for Bennett’s Duets II LP, out September 20. Other guests on the release include Lady Gaga, John Mayer, Aretha Franklin, Queen Latifah, and Willie Nelson.

Watch It: Amy Winehouse and Tony Bennett, “Body and Soul”