Think you know everything about the band's 1991 classic? Think again. 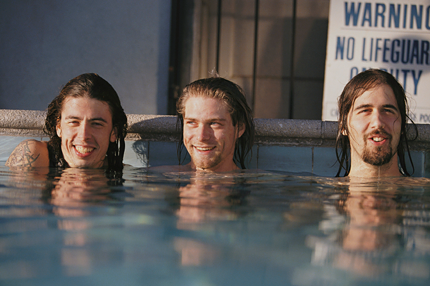 MYTH No. 5: NIRVANA ORIGINALLY MADE A CASSETTE DEMO OF “SMELLS LIKE TEEN SPIRIT” TO PROVE THEY HAD A HIT.
Nirvana first recorded “Teen Spirit” onto a boombox at a rehearsal, which is included on the forthcoming Nevermind box set. But even though the band liked the riff, no one in the group knew it would be an immediate hit. Butch Vig said he knew it was one the moment he heard it in early ’91, when Cobain sent him a copy of their new material. But the real reason Nirvana started recording their demos on a boombox, according to Grohl, was because they kept forgetting how to play several songs they’d written. “So many songs got thrown away, until we finally said, ‘Maybe we should start recording them on a cassette,'” he said. (Bonus trivia: The tape began with Kurt saying, “Hey Butch. We’ve got a new drummer, his name is Dave Grohl, and he’s the best drummer in the world.”).

MYTH No. 6: COBAIN WROTE NEVERMIND ABOUT DRUGS.
Drug references do spring up in several songs, but Kurt’s muse was complicated, and his full-scale drug addiction didn’t start until after the album was recorded. Before Nevermind, he had experimented with heroin, but he wasn’t a full-blown addict. Most of the record was written about his friends, neighbors, or girlfriends. His initial plan was to break the album up into a “boy” side and a “girl” side. The “girl” side would consist of songs like “Teen Spirit,” “Drain You,” and “Lounge Act,” most inspired by Cobain’s unrequited crushes of that time. The “boy” side would contain a variety of songs, including “In Bloom,” which was written for his best friend Dylan Carlson. (Bonus trivia: “Breed” is a rewrite of a song off the Smart sessions titled “Immodium,” which was inspired by the intestinal problems of Tad Doyle of Tad.)

MYTH No. 7: THE COVER OF THE ALBUM WAS COBAIN’S IDEA.
Kurt did come up with the cover idea for Nevermind, but his initial idea bore little resemblance to the final image of a baby floating naked in a pool. He had seen a late night television show on underwater birthing, and wanted a photograph of a baby’s head right as it began to exit the vagina — he went as far as to sketch out the image in his journal. Yet when Kurt tried to license the gory and bloody photograph, he was rebuffed. The naked baby photo was the back-up plan. Spencer Elden, the baby pictured on the cover, has since joked that he’s the world’s “biggest porn star” because so many people have seen his penis.

MYTH No 8: NEVERMIND IMMEDIATELY MADE COBAIN A RICH MAN.
There is a common misconception that Cobain became an overnight millionaire with the album’s success. But the album didn’t score Gold Record status until a month after its release, and the bulk of the sales arrived in 1992 or later. Most record companies only pay royalties twice a year, and payments lag sales by several months. As a result, Cobain earned almost no money from Nevermind in ’91. His income that year totaled $29,541, and almost all of that was from a fall tour. When Cobain returned home to Olympia, WA, after recording the record in the spring, he found his belongings sitting in boxes by the curb: He had been evicted. He spent that first night sleeping in his car, while his record label completed the finishing touches on an album that would sell over 25 million copies.