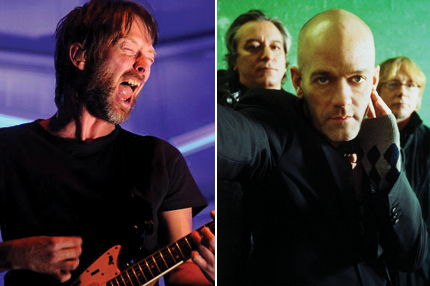 Every October, singer-songwriter Neil Young and his wife, Pegi, organize a charity concert in the San Francisco Bay area to raise money for the Bridge School, which educates children with severe speech and physical impairments. In honor of this year’s 25th anniversary, a three-DVD or two-CD collection of past performances from the event will arrive on October 24. All profits from the release will benefit the Bridge School.

Thom Yorke, R.E.M., Pearl Jam, and Neil Young are only a few of the artists featured on The Bridge School Concerts 25th Anniversary Edition. Others include Bob Dylan, Fleet Foxes, the Who, David Bowie, Bruce Springsteen, Metallica, No Doubt, Tom Waits, and Sonic Youth. SPIN.com will premiere the video of R.E.M.’s performance on October 18.

The 2011 Bridge School Benefit is set for October 22 and 23 at Shoreline Amphitheatre in Mountain View, CA. Eddie Vedder, Foo Fighters, Beck, Arcade Fire, and Mumford & Sons are among the artists joining Young on the bill. Tickets are available now through Live Nation.

Listen to Radiohead frontman Yorke’s 2002 Bridge School Benefit Concert cover of Young’s “After the Gold Rush” below, where you can also find a trailer for the release.

Hear It: Thom Yorke, “After the Gold Rush”