Check out the pop-punk trio's 'Neighborhood' while chatting online with people in your neighborhood. 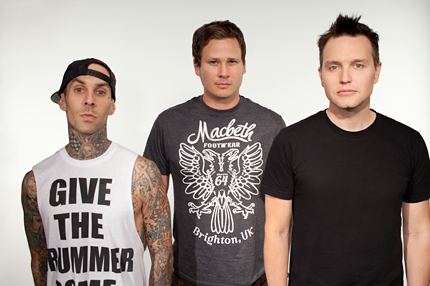 Blink-182’s first album in eight years, Neighborhoods, is out today, and the pop-punk trailblazers are previewing the tracks online. There’s a twist: You can listen to the album with other fans in your neighborhood. Check it out here.

The website streaming Neighborhoods asks listeners to share their location then chat with their neighbors as the album plays.

One of SPIN’s 26 Fall Albums That Matter Most, Blink-182’s sixth LP comes after a lengthy hiatus that included drummer Travis Barker’s recovery from a plane crash and the death of longtime producer Jerry Finn. As you might expect, Neighborhoods carries with it an increasing maturity — even seriousness. The 10-track release features the insomniac rocker “Up All Night,” along with the introspective “After Midnight,” and the accusatory mosh-pit frenzy “Hearts All Gone.”

Frontman Mark Hoppus has said the band is moving beyond their radio-friendly pop-punk sound, and that’s true, but their ventures into darker or weirder styles still generally have a solid foundation of catchy tunes, simple guitar chords, and bristling punk drumming.

Blink-182 might also be coming to your neighborhood in the flesh — they’re in the middle of a tour with My Chemical Romance.