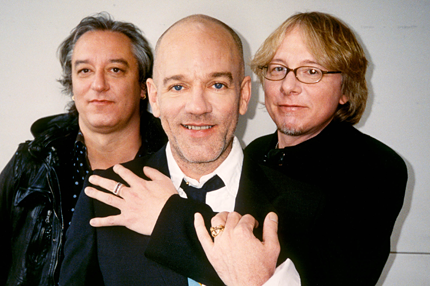 After announcing a decision to call it quits earlier this week, R.E.M. have revealed details about their upcoming, career-spanning greatest hits compilation. Titled Part Lies, Part Heart, Part Truth, Part Garbage: 1982-2011, the collection arrives November 15 via Warner Bros., according to The Hollywood Reporter. More details are anticipated on Monday.

On Wednesday, R.E.M. posted a statement on their website unveiling their decision to move on after 31 years and 15 albums.

The band’s breakup comes after the release earlier this year of Collapse Into Now, which, per our reviewer, “mostly sounds like a familiar friend.” A two-CD reissue of 1986’s Lifes Rich Pageant followed in July.

Check out the six-song encore set from R.E.M.’s final concert, on November 18, 2008, via Slicing Up Eyeballs. Introduced as the conclusion of “our last show for a long time,” the 36-minute video includes such songs as “Losing My Religion,” “Life and How to Live It,” and “Man on the Moon.”