Radiohead guitarist joins the electronic guru in Poland for a performance with composer Krzysztof Penderecki. 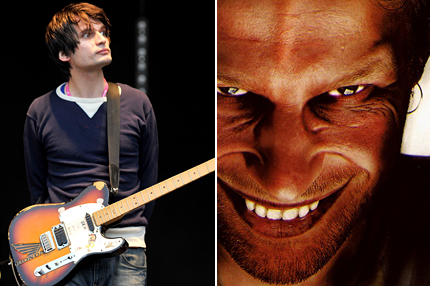 At the turn of the millennium, Radiohead and Aphex Twin were each separately responsible for helping drag alternative-rock fans kicking and screaming into the world of electronic music. In the early 1960s, Krzysztof Penderecki composed experimental pieces that made use of harsh, jostling dissonance, eventually making him a popular soundtrack choice for directors of ominous movies. Over the weekend, the three came together, as the Radiohead’s Johnny Greenwood, Aphex Twin maestro Richard D. James, and Penderecki himself took the stage in the Polish composer’s home country, reinterpreting his early work with help from an orchestra — watch footage below.

On Friday, Greenwood premiered his “48 Responses to Polymorphia,” a piece inspired by Penderecki’s 1961 “Polymorphia.” On Saturday, Aphex Twin unveiled his remix of Penderecki’s 1960 “Threnody for the Victims of Hiroshima” along with his own “Polymorphia” reworking, titled “Polymorphia Reloaded.” The performances took place as part of the European Culture Congress in Wroclaw, Poland.

A meeting between Radiohead and Aphex Twin — even separated by the space of an evening — was hardly foreordained. As Consequence of Sound points out, Aphex Twin’s James once told the now-defunt Kludge Magazine, “I wouldn’t play with them [Radiohead] since I don’t like them.”

Penderecki may not be a household name for many rock fans, but he is an avant-garde luminary. As the New Yorker music critic Alex Ross notes in his book The Rest Is Noise, Penderecki was part of a wave of Eastern European composers who rose to prominence with a musical approach known as sonorism. As Ross tells it, government officials only tolerated the “shrieking cluster chords, sputtering streams of pizzicato, [and] siren-like glissandos” of “Threnody for the Victims of Hiroshima” after Penderecki gave it that politically acceptable title. The piece was originally called “8’37″” and it appeared in Stanley Kubrick’s 1980 adaptation of The Shining.

WATCH: Aphex Twin, “Threnody for the Victims of Hiroshima (Remix)”