Radiohead to Tour in ’12, Atoms for Peace LP News

Thom Yorke talks tour on BBC Radio 1, says album from his star-studded side band Atoms for Peace is almost complete. 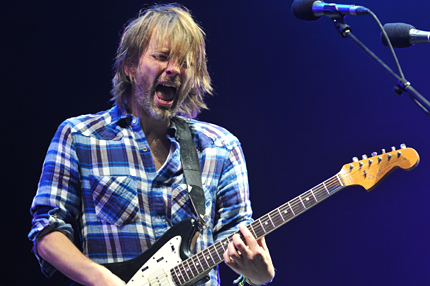 First they take Manhattan, but Radiohead will embark on a broader global conquest next year. Days after the British rock giants revealed a busy week of performances in New York City, frontman Thom Yorke has unveiled plans for Radiohead to go on a full-fledged tour in 2012. Yorke has also said an album is on the way from his all-star side project, Atoms for Peace.

As Green Plastic points out, the announcements came last night during Yorke’s two-hour guest appearance on Gilles Peterson’s BBC Radio 1 show. “The idea is to go out and play next year, on and off during the year,” Yorke said. He added that Radiohead might enlist Portishead drummer Clive Deamer to join the band on tour.

Radiohead will be performing live on TV and in person later this month. On September 24, they’re set to perform as the musical guests on the season premiere of Saturday Night Live. On September 26, they’ll play and answer questions from Stephen Colbert during an expanded, one-hour edition of The Colbert Report. Radiohead also have a pair of live shows set for September 28 and 29 at New York City’s Roseland Ballroom, with tickets going on sale September 26.

Hear It: Thom Yorke in the studio with Gilles Peterson, BBC Radio 1