The British rockers will play a full-hour 'Colbert' on Sept. 26, followed by shows at NYC's Roseland Ballroom on Sept. 28-29. 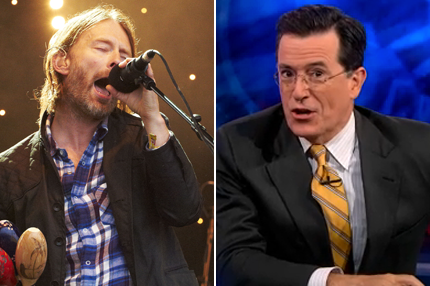 Radiohead are about to descend on New York City. The British rockers previously announced they will be the musical guests on the September 24 season premiere of Saturday Night Live. Now they’ve also confirmed plans to appear on a special one-hour episode of The Colbert Report on September 26. And they’ve revealed two shows in the city later that week.

On Colbert, the band is scheduled to play the new and previously unreleased track “The Daily Mail” along with tracks from latest album The King of Limbs. Stephen Colbert, who is also set to interview the group during the expanded edition of his usual half-hour show, said in a news release, “I look forward to meeting the Radioheads and leveraging their anti-corporate indie cred to raise brand awareness for my sponsors.”

Radiohead’s New York City shows are set for September 28 and 29 at Roseland Ballroom. Tickets will be available on September 26 starting at 10 A.M. via Ticketmaster.

As for SNL, Radiohead are making their second appearance on the show, following their guest slot in October 2000 playing songs from the Kid A album. Alec Baldwin is slated to host.

Even as Radiohead make their first U.S. appearances promoting The King of Limbs, the group’s individual members have been up to their own musical ventures. At Ease reports that frontman Thom Yorke played a solo show last night in Cornwall, England; the site has posted a photo apparently taken during the event.