Alternate versions of "Smells Like Teen Spirit," "Breed," and "On a Plain" hit the web. 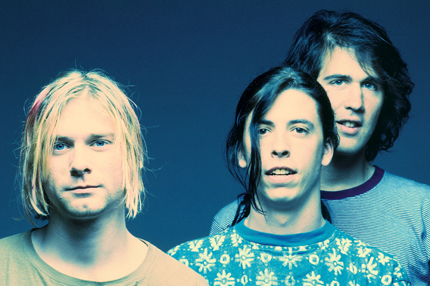 Three previously unreleased tracks from Universal’s 20th anniversary reissue of Nirvana’s Nevermind (due out Sept. 27) have surfaced. Hear alternate versions of “Smells Like Teen Spirit,” “Breed,” and “On a Plain” from Seattle radio station 107.7 The End.

“Smells Like Teen Spirit” is as an intense live recording from Seattle’s Paramount Theatre, where the band filmed scenes for their “Lithium” video. “Breed,” in the form of a demo recorded with producer Butch Vig at his Smart Studios in Madison, WI, shows that the song was relatively fully formed even in embryonic form, though it lacks the album version’s blistering drums. “On a Plain,” available as a “boombox” demo version, is the roughest of the three, with pre-song banter between the band members.

The Nevermind reissue will be released September 27 in multiple formats. The Super Deluxe Edition, a 4-CD/1-DVD box, includes the Smart Studios demos and “boombox” recordings, plus the Devonshire Mixes — Nevermind as mixed and produced by Vig. BBC radio recordings and a live DVD of the band’s 1991 Halloween show at the Paramount are among the other higlights. A 2-CD Deluxe Edition and 4-LP 180-gram heavyweigh vinyl version will also be available, and the Paramount show will be issued on DVD and Blu-Ray.

As previously reported, Jon Stewart is joining in the events commemorating Nevermind. On September 24, the 20th anniversary of the album’s release, The Daily Show’s host will sit down with Nirvana’s two surviving members — Dave Grohl and Krist Novoselic — along with producer Butch Vig for a two-hour interview about the making of the album. The interview, which will include questions from a live studio audience and phone call-ins, will be broadcast at 8:00 P.M./ET on Sirius XM’s Lithium channel.

Novoselic leads a Nevermind tribute show tonight in Seattle. The bassist is set to perform the whole record along with such bands as the Long Winters, the Fastbacks, Visqueen, and others.