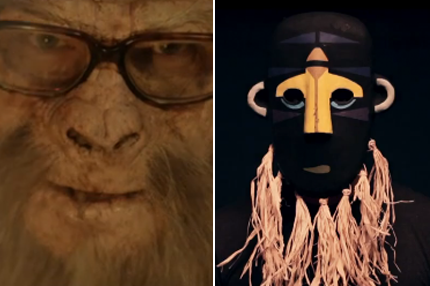 New videos from two of electronic pop’s big hopes make for a study in contrasts. Australian dance-rockers Cut Copy beam their dismembered heads to a planet of the apes in the elaborately conceived, effects-wielding clip for their “Blink and You’ll Miss a Revolution,” from this year’s Zonoscope. Masked London beatmaker SBTRKT, meanwhile, keeps it relatively simple, letting guest vocalist Roses Gabor stay in the foreground in the clean, no-frills video for his self-titled debut’s “Pharaohs.”

Cut Copy’s members show up in pieces in the “Blink and You’ll Miss a Revolution” video: heads singing without torsos, forearms playing the drums without the rest of the arm, and so on. It’s hard to say what the lithe synth-pop song has to do with all these body parts winding up in the clutches of highly intelligent apes in monk garb — “We’re on the path to eternity,” frontman Dan Whitford sings on the chorus, perhaps providing a clue — but there’s plenty to watch, as the computer effects set the stage for a full-on ape-man concert.

The clip for SBTRKT’s “Pharaohs” is no less sharply executed, but despite the SPIN “Breaking Out” subject’s forward-thinking productions, the approach here is of a more streamlined variety. SBTRKT can occasionally be glimpsed in the background behind his African-style mask, but the focus is — literally — on Gabor, who dances and sings in a shadowy room filled with cameras. “I need me a golden crown,” she coos atop SBTRKT’s rubbery electro-R&B, in this fitting follow-up to his Little Dragon-featuring hit “Wildfire.”