The Atlanta rapper talks Tupac, 'The Art of War,' and chili cheese fries. 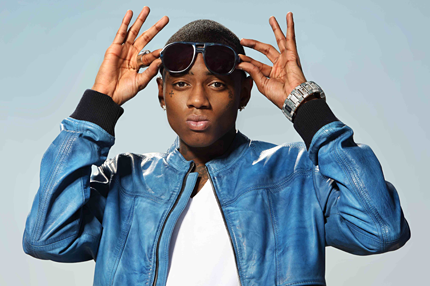 This week: Soulja Boy, the 21-year-old Atlanta rapper — yes, the guy behind the dance Natalie Portman loves — who is bringing Southern hip-hop into the next generation. His Respect My Hustle drops later this year.

FAVORITE SONG:
“Keep Ya Head Up” by Tupac. That song is inspirational. When I was 10 years old my mom used to play Tupac while she cleaned the house. I remember rapping over that song when it came on. Those are some great memories.

FAVORITE ALBUM:
All Eyez On Me by Tupac. Tupac was on some other shit when he made that album. He was so far ahead of other rappers. That album is one of the biggest selling in hip-hop along with Biggie’s Life After Death, Eminem’s The Marshall Mathers LP, and 50 Cent’s Get Rich Or Die Tryin’. I hope one day I can put out an album that sells 10 million copies. Tupac is incredibly inspiring as a person and musician.

FAVORITE NEW ARTIST:
Diggy Simmons. Diggy has put out consistent quality material. I like the Copy, Paste record he did. I’m also impressed by the moves he is making outside of music, like his shoe line. I’m looking forward to what he’ll come with next.

FAVORITE WAY TO PASS TIME ON THE ROAD:
Playing video games. I don’t travel anywhere without the PS3 and XBox. There’s nothing better to do on long bus trips while on tour. My favorite games right now are Skate 3 and Gears Of War 3.

FAVORITE MANTRA/QUOTE/PIECE OF ADVICE:
“To Be Or Not To Be.” To me it represents having no fear in whatever you do in life. It says if you’re going to pursue something you go at it with everything you got. When I decide what type of music I’m going to create in the studio, I think about that saying and what I’ll be representing. If I’m going to make music for the streets or the clubs or whatever, I go at it with 110 percent.

FAVORITE PLACE TO ESCAPE:
Tokyo, Japan. When I was in Japan on tour in 2010, I felt like I was 30 years into the future. I love technology and they are so advanced with their phones, computers, everything. I think they had the iPhone way before we did in the US. I love gadgets, games, social media and I try to stay ahead on all that stuff, but they get it all first.

FAVORITE TV SHOW:
Death Note. It’s a Japanese show about a High School student with a supernatural notebook, and anyone he puts in the notebook ends up dying. It’s dope.

FAVORITE MOVIE:
The Social Network. I love anything about new media and ways to socially connect and market yourself digitally. I thought that movie was incredible and did a good job explaining the evolution of Facebook.

FAVORITE FOOD:
Chili cheese fries. I can’t explain why I like them other than they just taste so damn good. My favorite ones are at Steak N’ Shake, a food chain in the south.

FAVORITE BOOK:
The Art Of War by Sun Tzu. I enjoyed learning about different strategies that you can apply to success. A great book to reference for the music business.