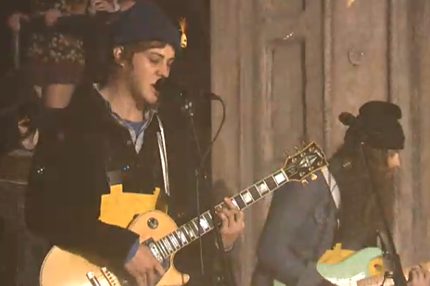 MGMT played a song that would seem natural for the East Coast psych-rockers: “Lucifer Sam,” from 1967’s playful, acid-warped The Piper at the Gates of Dawn. Joining the band with a reel-to-reel tape player was Cox, wearing what looked like the same Joey Ramone costume he donned during a recent Georgia show with the Black Lips. Ample amounts of bubbles and dry-ice fog accompanied the ensemble’s faithfully trippy performance

Fallon’s week-long tribute to Floyd continues Thursday, when country star Dierks Bentley will perform the title track from Wish You Were Here. Pearl Jam will cap the week Friday with The Walls “Mother.” The performances coincide with an enormous Pink Floyd reissues series, kicked off this week with a six-disc box set edition of The Dark Side of the Moon.

“Luficer Sam” isn’t the only psych-tinged song MGMT have covered recently. The band’s spaced-out version of Bauhaus’s “All We Ever Wanted Was Everything” will appear on MGMT’s entry in the U.K. LateNightTales compilation series.