It's the second-biggest first-week sales for an album this year, and Wayne's third No. 1 album. 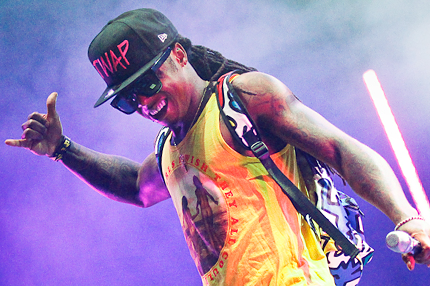 Lil Wayne has once again put up big numbers on the Billboard 200 albums chart. The rapper nabbed the No. 1 spot this week for his album Tha Carter IV, selling 964,000 copies, according to Billboard. It’s the second-biggest first-week sales for an album this year — behind Lady Gaga’s 1.1 million for Born This Way, but ahead of Jay-Z and Kanye West’s 436,000 for Watch the Throne.

Wayne has two previous chart-topping albums, 2008’s Tha Carter III and last year’s I Am Not a Human Being.

Take into account Gaga’s first-week discount pricing, and Wayne’s sales figures look even more impressive. According to Billboard, Gaga sold an estimated 440,000 downloads for 99 cents each, during a two-day sale by Amazon’s MP3 store. Tha Carter IV’s sales of almost a million copies came without such pricing.

On the download front, Wayne can also claim a milestone. Yes, Tha Carter IV’s first-week digital sales of 362,000 trail Gaga’s 662,000, the year’s most. But sources told Billboard that Wayne’s album set a new iTunes single-week sales record by a wide margin, moving around 345,000 copies. According to The Hollywood Reporter, that means Wayne dethroned Watch the Throne — an album that was only available on iTunes for its four days of release. SoundScan does not share retailer-specific numbers.

In other Wayne-related developments, Detail — producer of The Carter IV hit “How to Love” — told MTV News that Enrique Iglesias plans to record a Spanish cover of the song. “Enrique changed a couple of words to make it work for what he does, and it was a great situation,” Detail said. “It was a great opportunity for two worlds to come together.”