At a Chicago party, Wilco's frontman covered "I Gotta Feeling" and "Rock That Body" and read the lyrics to "My Humps." 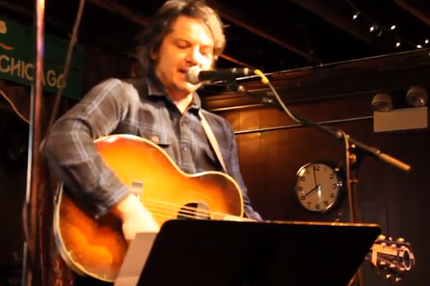 Jeff Tweedy played acoustic versions of two Black Eyed Peas songs and recited the lyrics to another last night at Chicago venue the Hideout, Time Out Chicago reports. Watch him cover “I Gotta Feeling” below.

The leader for Windy City rockers Wilco was appearing at the release party of a new book by Dan Sinker, The Fucking Epic Quest of @MayorEmanuel. During now-Mayor Rahm Emanuel’s campaign, Sinker ran an uproarious fake Twitter feed dedicated to the candidate’s famously obscene outbursts. As Time Out Chicago observes, @MayorEmanuel posted a series of tweets calling for Tweedy to cover Black Eyed Peas at a campaign event. “People love that shit,” the fake Emanuel reasoned.

The mayor of Chicago’s profane Twitter alter ego is still fictitious, but Tweedy performing the tunes made famous by Will.i.am, Fergie, and the rest of their pop troupe? That’s now very real. Tweedy played acoustic guitar and sang on versions of “I Gotta Feeling” and “Rock That Body.” He also gave a spoken-word reading of the lyrics to “My Humps.”

“This has been very challenging,” Tweedy said at the event. “I really overestimated myself or underestimated the Black Eyed Peas. I honestly have no idea which, but it’s really not my skill set.”

When Tweedy isn’t giving his renditions of pop hits, he’s been busy introducing songs from Wilco’s upcoming album, The Whole Love, due Sept. 27. An acoustic performance of new song “Dawned on Me” surfaced last month, following folk-pop burst “I Might” earlier this summer.Watch: Jeff Tweedy, “I Gotta Feeling”